Posted by Gayathri Ramachandran on Jan 1, 2019

As this year winds to a close, volunteers suggested that it might be fun for me to do a post with excerpts/nuggets from 10 memorable Awakin Calls of this past year. The idea resonated, so here is my list.

Needless to say, these 10 were rather difficult to choose since there is something resonant or meaningful in almost every call we’ve had. And as all members of the Awakin Calls scribe and editing team can attest -- as we spend a lot of time soaking in these calls, even the calls that first seem to be at the outer limits of our sphere of interest unveil some talisman, that we then hold on to, for nourishment. So with that caveat in place (and the invitation to please spend some time at the site browsing randomly till something calls to you) -- here is a list, from my lens :)

Sarah Peyton: The Riddle of Self-Esteem Sarah is a certified trainer of the Center for Nonviolent Communication who has a passion for weaving together neuroscience knowledge and experiences of healing that unify people with their brains and bodies. Claire is the founder of TreeSisters.org, a quickly-growing women’s crowd-funding and consciousness-shift campaign to inspire and direct the brilliance, creativity and generosity of women towards the reforestation of the tropics and shared leadership around ecological restoration
Myron Eshowsky: A Deeper Listening Myron embodies many roles – among them, that of mediator, shamanic healer and co-director of the Social Health Care Program for Syrian Refugees based in Jordan, which provides direct services and training in trauma treatment for Syrian families displaced by the conflicts.
Greg Tehven: Business, Local Community, and Love Thought leader, storyteller, and advocate for the creative class, Greg Tehven is turning the world of conventional economic development on its head, and inviting people to build the communities they want to live in.
Terry Patten: A New Republic of Heart Terry is a philosopher, teacher, activist, consultant, social entrepreneur, and author. Over the last fifteen years he has devoted his efforts to the evolution of consciousness by facing, examining, and aiming to heal our global crisis through the marriage of spirit and activism.
Emma Slade: From Global Banking to Monasticism to Compassion in Action How does a jet-setting financial analyst from London end up a Buddhist nun in Bhutan? Emma Slade (ordained as Ani Pema Deki) is a yoga and meditation teacher and author who left a successful career in finance in her thirties to find peace and meaning in the mountains of Bhutan.
Ron Epstein: Responsible Living Ron Epstein, Ph.D., is a Buddhist scholar and practitioner who has spent decades as a professor of Buddhist studies.
Phuoc Le: HEAL-ing Others and Paying Forward the Blessings Dr. Phuoc Le has long been an advocate for equitable healthcare worldwide. These days, Dr. Le wears many hats, from physician to professor to researcher to director to co-founder of the HEAL (Health, Equity, Action, and Leadership) Initiative, which trains front-line health professionals in order to build a community dedicated to serving the underserved.
Simon Hampel: A Quest for Visionary Leaders and Change Agents 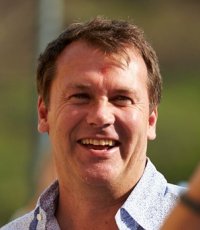 How do leaders become wise and compassionate stewards? The question has guided Simon Hampel in his work as a Partner of Leaders’ Quest, a London-based organization that trains leaders in business, government and civil society worldwide to become purposeful, conscious, and transformational leaders. Shabnam Virmani: Transcending Identity Through Poetry and Music Shabnam is a documentary filmmaker, former journalist, and singer of Kabir folk songs and the chief architect of the ‘Kabir project’. Happy 2019 to all my ServiceSpace "time-comrades" (as one guest put it)!