Maitri Inside and Maitri Outside

[Originally Posted by Moved by Love]

The gathering opened with a sharing on the story of the mythical bird 'simurgh' from the classic poem of Persian poet Fariduddin Attar. 30 birds undertook an arduous journey to meet the Simurgh who eventually was a reflection of themselves wrote Attar, in a way 42 of us gathered to dip into the river of 'Maitri' as we opened the circle with a seed question on - What was a key shift that took place in our lives in the past year and any ripples from it. As we all entered the Maitri hall for the opening circle, we were welcomed with a spiral rangoli of friends holding hands and dancing together. 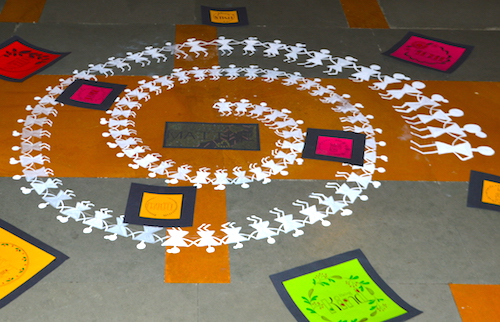 Nimo started the circle by sharing small acts that have created magical ripples in the children he volunteers with and the awareness of what feeds his soul; the children are the khichdi (comfort food) for his soul. Last one year saw Neerad come out of a life threatening situation and he shared how looking back he has realised that there is a higher design that is beyond our understanding . Cultivating complete faith and surrender to what is evolving, he resonated with a quote on the wall:

“Be willing to be a beginner, every single moment”

Smita ben went through a similar experience and resonated with the sense of surrender to the higher power. Sheetal ben shared how through the difficult moments, she has tried to connect with the hearts of everyone she came across and felt her field of Maitri ever expanding. From the lady who guards the lifts in the hospital to the doctors and nurses. Can we be noble friends with one and all? Many slow stories that have emerged not over last one year but over many years — Nipun’s mom who has been hosting Awakins for the last 18 years is serving sweets for a guest's birthday even when she herself was going through immense pain and the fear of losing her own son; Pinal ben and Lopa ben have been witnessing small shifts in their daughters ever since they started hosting Awakins. These are just a handful of the 42 sharings that went way into the night. A common thread through all was of Maitri, trust and surrender. Jayesh bhai closed the circle with his ever beautiful play of words:

“Do what God tells you to do. He is organised; we are all organic”

The opening circle laid the tone for the next 3 days, which were a festival of noble friendships. There were Spirited talks by few friends sharing their personal practices and journeys over the last one year.

Meghna shared how she has learnt to accept and not resist anything that comes to her. Life throws many “googlies” at us and most of them unexpectedly, but every person and every situation is helping her deepen her field of Maitri. Like the Japenese art Kintsukuroi, of repairing broken pottery with gold paints, we come out of every situation, more beautiful than before, with a little gold paint where the suffering was.

Parag bhai beautifully put together a journey of moving from constraints to liberation. Starting with the story of Mulla Nasiruddin and his horse, he explained how when we think that we “own” something, we evidently become a slave to it but when looked from the lens of liberation; whatever constrains us can also liberate us. The 3 main pillars (or constraints) of Service Space (and Moved by Love) of being volunteer run, no fundraising and focus on small are actually akin to meditation, equanimity and love. Instead of constraining, the three actually liberate us to serve better.

Anar ben’s vulnerable and honest reflection on her learnings from the trails and tribulations of the last one year, left most of us teary eyed. She spoke of a lot of edges she has been facing — of taking authority of her life or surrendering in service; of competing with opponents or develop friendships with them; of maintaining steadiness or embracing change; of putting boundaries or be without limits.

Deven spoke about moving from the apparent to the subtle; of deepening his personal practices of sadhana and serving his mother; of discovering his own shortcomings and realising that while he may clean the whole ashram, the empty plastic wrapper lying on his window is also him. For Shaalini, the last one year was all about stepping out of her comfort zone and with every experience she found herself experience the four shifts we so often talk about — from transaction to trust; from consumption to contribution; from abundance to scarcity and from isolation to community.

Nipun bhai presented a deeper understanding of the ecosystem and how we are all connected through various ties; how we are all the keepers of each other’s songs. He spoke of 3 kinds of changes that one can work towards and how through various offline and online engagements the ecosystem is engaging with thousands of people; organically creating ripples of love and many-to-many connections. Sharing five insights on Volunteerism, he explained how the ecosystem is able to recruit, motivate and retain volunteers for lifelong. Principles like creating a fluid engagement matrix, having low barriers to entry and more that many of us would find helpful to implement in our own work spaces. Speaking on the shifts at various levels when we move from leadership to laddership, he seeded the question of how each one of us can deepen our journey of laddership.

Ashima shared how a simple practice of saying good morning to everyone she crossed during her morning walk, led to a shift from fear to love. Chris shared how living in the Sughad campus for the last 11 months has transformed him to a much calmer person, how his reactions to specific actions have mellowed down and he has learnt to respond to them better. Divyang shared about his journey with his partner, watching her explore different things and not holding back because of failures. He also shared a beautiful moment when he was making a film on gratitude and bowing down to the divine in the other and a child actor suddenly practiced it even with animals. It was not part of the script and it moved him so much that he no longer could put just his name as the “maker” of that film, for he was just the instrument and someone else wrote the script.

Vijayam ji showered us with wonderful experiences from her teaching career, the relationships she built with her colleagues and students and how we should all be careful of our dreams as dreams do come true! Teji tai spoke of how when there is faith or shraddha, only then do we perform yajna karma. We are all part of the universal yajna karma and are constantly making an offering of oneself. She also shared the story of Nachiketa from the Kathopnishad which is very dear to her heart as it was a translation her dear mentor Vimala thakkar had given her to do.

Sachi’s talk was an honest confession on the struggles she goes through every day while managing two of her babies — Aashiyana and Shunya. She shared many stories from the remand home where children responded beautifully to love where earlier only authority was used. But often also being torn when her efforts are futile. “Is it my karma to be able to help or not? or is it the child’s karma to suffer or not?”. Very openly she put forth all her insecurities; her confusions and her intentions. Offering her work as a prayer, she has learnt to surrender to the moment and felt amazing ripples emerge.

Nimo shared his journey of connecting back with music after a gap of almost 7 years. How the unfolding of the kindness song was an unfolding of maitri — with no plan and no resources within 2 days the song was written, recording and the music video was released. Magically people appeared at the right moment at the right place. Such was the power of the community and true intentions.
All through the 4 days, we had been dancing to his songs and in the end he offered a new unfinished creation to the group.

The heartist’s sharing were enriched by songs, reflections, hugs and observations from all the participants. In between sessions there were breakout sessions for a smaller group to go deeper on one particular topic for instance “our relationships: do we see them as enablers of constraints?”; “our practices: how do we discern between cultivation and being?”; “how can we dive into new ideas without fear of failure?”; and more. The days were a collection of experiences of grace and surrender. A world tour through each other's journey that subtly changed us. As Meghna recalled a dialog from the movie Pochahontas, "The funny thing about rivers is that you cannot step into the same river twice", we all were the same on the outside but changed inside after every day.

We are all interconnected and one person’s journey was not separate from another. As the 30 Simurgs, we all came together in our Collected Self when one and many were the same. As we looked into each other, we saw we were not two but one. We held our hands and danced; spiralling inwards and outwards in the dance of maitri.

A lot transpired in those 4 days and each one of us felt that we had so much to learn and grow into to be a true ladder. It was not just the 42 friends who were sitting in the circle that made those days magical, so many invisible hands had come together, who couldn’t be physically present. From the gifts that magically popped up on our beds, to the rangoli in Maitri floor that grew every night, to the shawls that were warmly wrapped around us during dinner, to the meals and the hot drinks that were there as soon as we felt hungry, to the nightingales who enchanted us with their prayers, to the blessings of the elders that brought us together in the space. 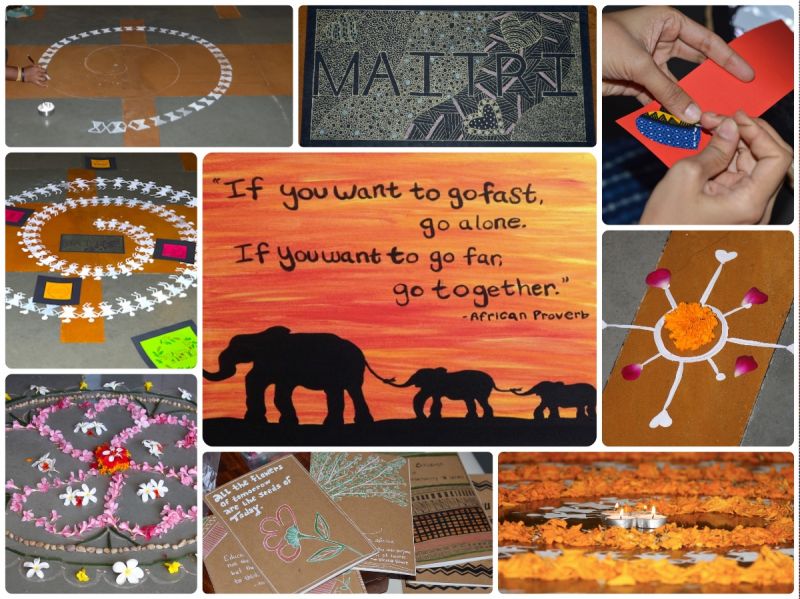 Some elves stayed up all night to bring all of us the gift of this beautiful slide show of 'caught on camera' moments. Here is the link for all the photos of the retreat.