Gaus, With a White Shirt

About 10 of us along with Gautam Dada went to Maher Ashram - Sister Lucy’s organization on Saturday, 25th March 2017. We had a ‘Moved by Love' experience, just in the way they welcomed us. It was a great ripple of the NGO retreat. We were all further moved by Sister Lucy’s love for all of us children, women, men and staff in the organization -- and all the visitors.

While visiting, we heard Gaus's story, in his own words. It was so powerful, and stirred something in each one of us.

When he was 5 years old, Gaus wanted to go to school. So he just dropped into a classroom and started to learn. Even the teacher allowed him to sit in the class without official admission.

He enjoyed going to school till one day, there was a classroom inspection. His teacher told him to get a white shirt which is the color of the uniform of the school. Excited, he went home searched for it and on not finding one asked his mother to buy him one. His mother took him to the shop. She had Rs 25 and the shirt cost Rs 300, so it was not to be.

Gaus’s father was an alcoholic and also paralyzed. He had 2 sisters and a grandmother all staying in a 10 X 10 room. Gaus was told by people, "You need to work and help your mother. There are so many mouths to feed." So, at the age of 5, he got his first job!! He worked in a garage washing cars and also worked at a food stall in the evenings. The food stall incentive was particularly appealing since he could carry all the left over food at home for the whole family!

Gaus had reconciled to be happy, so he sang songs and went about his daily responsibilities.

One day, Sister Lucy visited his house. There was no electricity in his house -- the only light which came was from a cemetery near by. After talking to his mother, she asked her to send him to her school. Mother used to do household chores and sisters helped with that; when Sister Lucy asked this question, Gaus look at this sister with big, bright eyes. She still remember that look in Gaus's eyes. They all agreed, and Sister Lucy took Gaus to Maher Ashram.

Gaus describes the trip to Maher like this: "So far, I had only cleaned cars from the outside. This was the first time I actually sat inside a car."

When they reached Maher, at the age of 7, he saw that there was light -- not just for the cemetery! He was amazed to receive a blanket, a pillow, bedsheet exclusively for himself. At home, they shared one blanket between 4 or 5 of them. Sister Lucy gave him rice and lentils and that to him was a treat. "Don't gulp it down so fast. You get will get more if you need it, eat slowly," Sister said. In the morning, he got a tooth brush and paste which he used for the first time! He remember, "I brushed my teeth for 2 hours refusing to spit out the toothpaste!” When Sister told him spit it out, he said, “No, it is sweet!"

So on and on he went. He went to school, and finally got his white shirt! He did not remove it for 4 days, "till the white shirt turned black." Sister got him another white shirt telling him that you could wash and wear it alternately and so began his journey.

When Sister Lucy first asked him go up on stage to speak, he started crying. Now Sister jokes, "First, when I told him to go on stage, he was crying. Today, if I pull him from the stage, he cries." Gaus has become a great speaker; he takes part in dramas and theatres and has gone to other countries to perform as well. Today, he has completed his MBA and on the verge of flying out from Maher. Naturally, he is very attached to Maher but Sister Lucy is tough in her love, "You job now is to get your mother out of the slums and give her a better life." 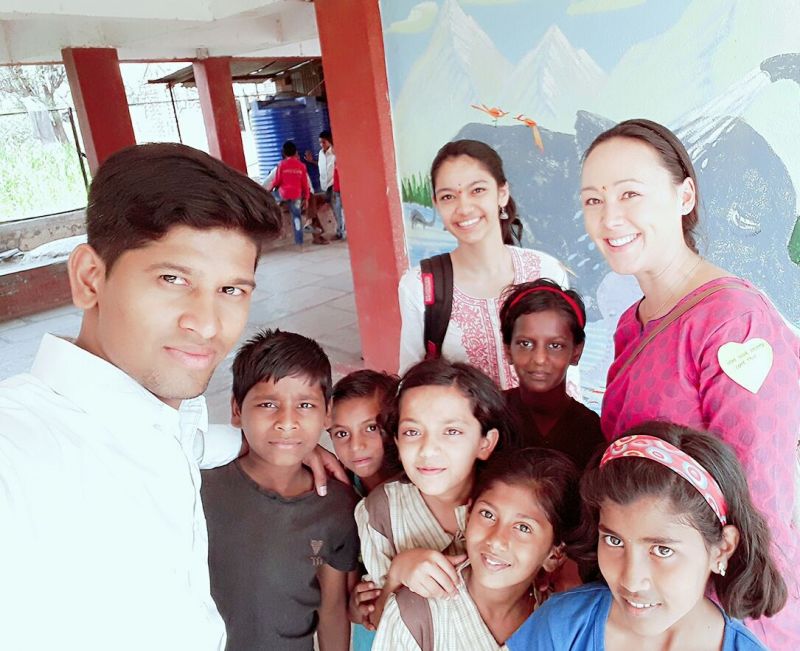 Sister Lucy feels Gaus’s mother is great, that she trusted her only son to a complete stranger. And much later, Gaus learnt that Sister Lucy had been compensating his family with food for the wages that Gaus was bringing each month.

Bowing to all in this story we were speechless, humbled, grateful and filled with love and tears. Sheetalbhai said to Gaus, "I see you giving a TED talk one day." So do we; in his white shirt which he still loves to wear.