The Role of Compassion in Education: Educators Retreat, Mumbai

The evening before the retreat, I was looking at an Excel sheet given to me by some ladders that had the flow of the retreat planned to the last minute.

It had details of which volunteers will welcome the participants, which ones will take care of the thaalis, teeka, heart pins, diaries and pen. Which one will sit with the sound console, and which one for the podium. Two volunteers sat up till 2 am to finalize on the participant list and coordinating with last minute sign ups. 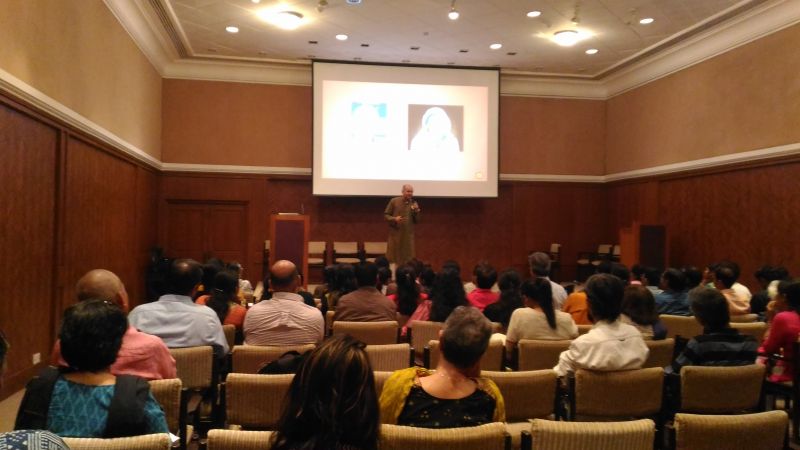 Teachers, principals, administrators and other educators - 79 participants in all came into the venue and were greeted by big smiles, hugs, decorated name tags, heart pins... before they were seated, there was joy in the air.
We started with a minute of silence, followed by a prayer song; an opening story that set the context for the need of Compassion Quotient among educators; a heart-on-the-sleeve, goosebumps raising presentation and Q&A on the need and power of compassion; a panel of four amazing speakers; a break-out session along with lunch and a summary of the break-out after; and finally a few examples from the ServiceSpace ecosystem presented by a few ladders as take-away practices for the educators.

All of the above between 10am and 3:30pm. Oh, I forgot the Nimbu Paani break that happened sometime before lunch and I have no idea who had arranged for both.
Sure the retreat was packed with a lot of content. Great content. But these were educators. They are used to a lot of content. They could probably give a course on compassion to anyone on a short notice. What they came for was not content. They wanted to learn how compassion is applied in real life. What it looks like, feels like to be compassionate under stress.
In addition to doing my bit of story telling, throughout the day, I was noticing the faces, hands and postures of the participants.

Paragbhai, while introducing Nipun, mentioned that if Nipun were to be a school's principal, he would have two classes for all - a class on friendship and a class where students will be tested on their ability to not give answers but to ask questions!

A row of faces lit up, perhaps signaling a recognition of what they already knew in their hearts.
Throughout Nipun's presentation and Q&A, I saw a range of facial expressions - some trying hard to pull back their tears, rubbing their eyes and cheeks, looking down or up, some tightly clasping their hands, gripping their seat hands... and the eyes, the eyes conveyed so much that it is futile to label them. They were responding and resonating partly to the concepts but mostly to the real life stories, the authenticity, the humility and the personal examples. At some point I realized that this presentation was not being recorded only to feel later that what carried the words to the audience was subtler than air and could not be captured by a camera.

Rekha Shahani opened the panel speech with her experiences and insights in being a school principal, being an Acharya of Bhramo Samaj, in training teachers and principals - something she might have done many times. Suddenly she decided to share a very personal story that touched everyone. It was not another speech anymore. It was a feeling of "we are all in this together with our vulnerabilities and unexpected courage". 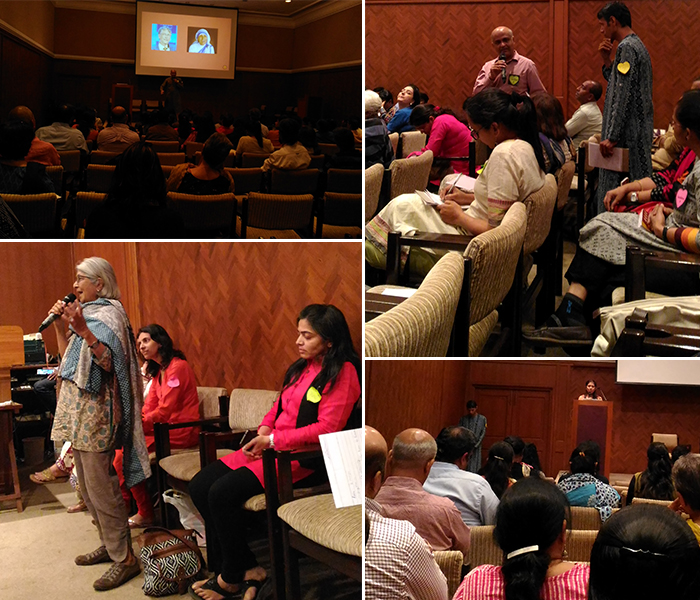 Mugda Shridhar Gore shared her work with Helpers of handicapped integrated school for the physically challenged. If one were to observe her speak without the audio, one would think that she is describing an exciting vacation she took. She shared her initial challenges and personal transformation in working with differently abled kids; poured her heart out to the audience and responded to a lot of questions. A gust of youthful energy blew through the room.

Chaitanyabhai, the trailblazer educator who has proved that you could create a school out of pure passion spoke in Hindi. While some of his words were beyond my bollywood vocabulary, his deep care for his students gave everyone a glimpse of what the guru-shishya parampara of ancient India would have been. His classroom in the village is built not with bricks and cement but with trees and care; and his main teaching method is to help the students see the universe in a grain of sand. He does not impose subjects on his students. Instead, he subjects his students to reality as a whole. For the audience, it was the equivalent of watching a "wild educator's story on discovery channel".

And then came Kunal Chawla. He was asked to be on the panel and hour prior to the scheduled time. But for a person who offers online courses that reach 2 million people, it was normal work. His approach to finding teachers in unexpected people conveyed the raw intelligence and compassion he brings to his work. For example, he asked an injured Olympic athlete  to teach anatomy and the result turned out to be much more than anatomy. He brings to life Rumi's words, "“The wound is the place where the Light enters you.” His insight is that people who have suffered have the rare combination of passion and compassion to teach to alleviate suffering in the world. They make great teachers.

The effects of the morning sessions were seen in full bloom during the break-out sessions which had topics like, "Compassion Vs January" (January being a metaphor for the standard, inevitable and stressful goals of a regular school), "My Language Vs Our Language" and "Now Vs The Future. Each group had a moderator and everyone dug into the topics with gumption and presented a summary.

When the retreat ended, no one was leaving the venue. There were selfies and hugs all around. It was a Saturday. And Saturday in Mumbai is premium time. These were not educators sent by their institutions to some HR program. Yet they came voluntarily and met with another set of volunteers to have a heart-to-heart on the role of compassion in education.

In spite of a long-ish blog post, I have a feeling that I have not captured what made this retreat possible. For example, I don't know what Sachi, Smitaben, Swara, Paragbhai, Kinnari, Vidhi, Drishti, Rupali, Yash, The Hair Stylist and names I am sure I am forgetting did to pull this off.

I don't know what I or anyone specifically learned in the retreat. But I am sure that this was one retreat the Dalai Lama would have been proud of.