Kirtibhai's Generosity at the June Retreat 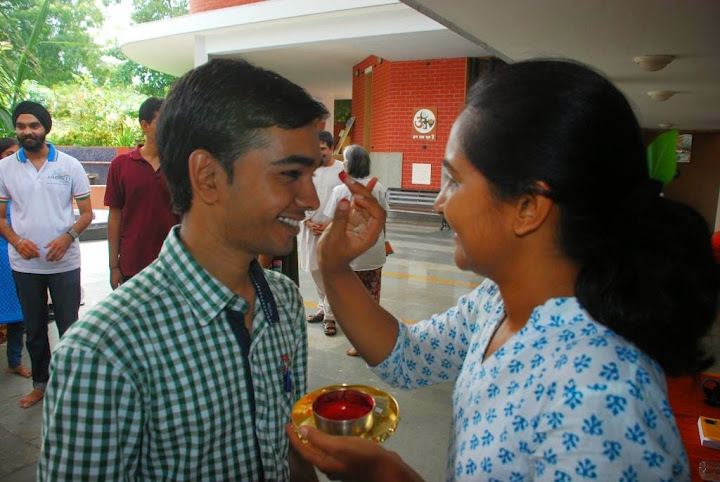 When I first met Kirti, I felt that I knew him from before. All I had heard is that he is this thin little boy who was always enthusiastic and always smiling. I saw him in a crowd and I knew this must be him and instantly we talked and we were both smiling and sharing stories. Just like brother and sister meeting after a long time!

He was participating in the Moved By Love June retreat where I was volunteering. He was walking around with his smile deck, striking conversations with people and asking them to pick one random card. He would request them to do the task they picked either during the retreat, if they can, or once they are home. Imagine starting a service retreat with so many random acts of kindnesses being done already!  And Kirti earning all blessings by being the catalyst for these acts.

Kirti has been part of Manav Sadhna’s Earn N Learn program and a regular volunteer at Seva Café in Ahmedabad. His father is an auto-driver and managing fees for his engineering degree is a challenge every semester. But somehow his faith opens up gates every semester. He would study hard to get a scholarship; he would participate in contests to win prize money.

At the end of the retreat he was tagged anonymously with two thousand rupees!! He went to Siddharth, confused, wondering if it was a mistake. Despite his hardships of studying and paying for college simultaneously, he resolved to use this gift for others in his community. Initially, he was a bit hesitant to share the ripples, since he thought people would think he's doing it for attention. But after much discussion, he finally agreed, since he thought it would only spread the ripples further!

Here’s an excerpt from an email he wrote to Siddharth:

How are you doing?
I want to share a few acts of kindness that I did with the money that was gifted to me during the June retreat.

Few days ago, as I was riding my bicycle, I saw a little girl and a boy. It was raining and they were walking together. I stopped to talk with them. Both were brother & sister and they were going home, walking back from school. They had no umbrella or raincoat. I asked them to wait for some time and went and bought umbrellas and some notebooks for both of them. Siddhrathbhai when I gave the umbrella to the little girl, she gave me such a big smile!! She said thank you and the smile and love on their faces reflected on my face as I went away. Next day I saw them going to school with the umbrella.

Just a few days later I met another little angel on the road. She was eating a biscuit and had one more biscuit in another hand. When I stopped, she came to me and offered me the other biscuit that she had! That time my heart was filled with waves of love!

A few days ago, it was Guru Poornima, a day to celebrate our teachers. A day before, I went to Manav Sadhna and bought greeting cards for all my professors. I wrote a letter to each and put in a smile card and a handmade flower in each envelope. On the day of Guru Poornima, I thanked my teachers and gave them the cards.
Next day during the lecture, our professor addressed the entire class and said: “Students celebrate a lot of days in college like birthdays, even t-shirt days, but forget festivals like Guru Poornima. But there is one student in this class who remembered and who celebrated this festival. He gave all of us cards with so much love!”

After that she told my name and asked me to say something. I shared about Manav Sadhna and Seva Café. Many students now want to come to Seva Café and volunteer.

I am so happy that someone gave me this opportunity to serve. I hope that many more will get such opportunities to serve.
jay shreekrishna .
With Love,
Kirti" ​We're all tremendously grateful that Kirti shares these stories. May we all keep paying forward our Gifts to our community :)