Gandhi 3.0: The Good in Me Bows to the Good in You 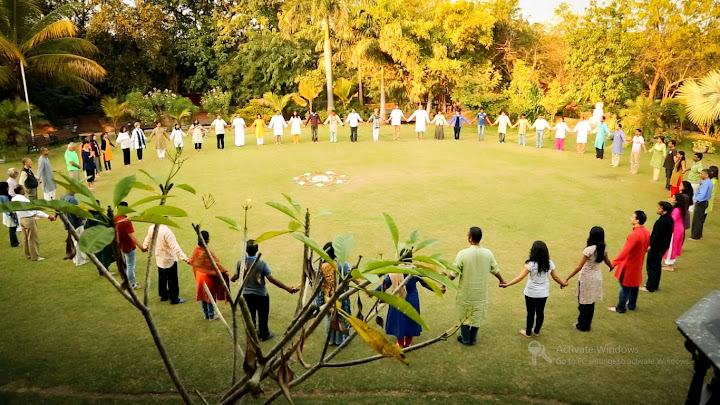 Sixty path creators from across the world responded to a compelling invitation to spend 4 days around Gandhi's 66th death anniversary and explore modern manifestations of Gandhian values. We called it Gandhi 3.0. From politicians to businessmen, spiritual cultivators to social entrepreneurs, the diversity of the gathering was held with nothing but ties of noble kinship or 'Maitri'.

The intention was set in the opening circle, with beautiful reflections of Vinoba Bhave: "​When we will all see our role in society as servants, we will all light up the sky together like countless stars on a dark night. Don’t think of society as the sky on a full moon night. The moon's harsh light blinds us to the true and humble work of the stars. But on a moonless night, the true servants shine forth, as though they are connected invisibly in this vast and infinite cosmos."

The intention, was to tune our eyes to see the true and humble work, the divinity in each and every one of us. And that happens only when we create a field of 'Maitri' around us. Often, this field takes on a more tangible, palpable form, and on Day 3, it was visible for all, when Prasad (a renowned author and corporate mentor) held the mic and shared how he's been making the shift from an Expert Mind to A Beginners Mind. It was the unconditional care he received through meals specially prepared for him, gifts that came his way just when he needed them in a manner that he felt even his family would not match, that helped his process of emptying. It was an ocean of love, as he said, that nourished him from within and breathed life into words of love that otherwise would have been platitudes. On the last day, Ritu came up to us and shared a letter she had received from Harsh, a volunteer at the gathering. 2 days ago, Harsh had heard that Ritu hadn't brought along any warm clothes. Promptly, he offered her his shawl which she was grateful to receive. Towards the end of the gathering she was preparing to hand it back to him, but instead received a letter from him. In it, he shared how his mother had gifted him this shawl, and as a child he would wrap himself within it to feel warm and secure. All through the years, all it took was the shawl to keep him warm, irrespective of the weather outside. In the past when he would lend the shawl to friends, he would ensure he received it back from them, but this time, he was moved to do otherwise. He now saw the shawl as an attachment, and wanted Ritu, to accept his gift. It was a gift that went beyond rationality, a gift that could be of little value to Ritu once she went back home - but when we acknowledge the roots of Maitri that fueled it, we realize it had the power to spark revolutions in our hearts.

From washing each others dishes, to gifting beautifully crafted offerings to one another, to listening deeply to what was shared - there was a flow of gifts offered to each other in the smallest and subtlest ways.  When we hold space in this way without short term agendas, its difficult to capture the essence of what transpired. We thought the best way to share the beauty of what we witnessed through a few snapshots. All through the retreat, I was practicing deep listening and here were a few phrases from all of you that moved me:

Madhu opened our gathering with this touching video:


And together, we built the story as Ellie incredibly managed to capture all the micro-moments of love from our 4 days together:

Shaily captured lots of photos that speaks volumes about the invisible bond that connects each one of us so deeply:

Thank you simply doesn't suffice to express that gratitude that all of us feel for each other. The only way to honor receiving such gifts is to attempt to pay it forward -- and I promise to do so.