While we were on our way to Golden temple last week, Arun Dada shared few stories of his first hand stories with Vinoba-ji ...

On Sleep:Vinoba often spoke about three kinds of sleep. First is the state of Su-Swapna, where we indulge into dreams that gives pleasure. Second is Du-Swapna where we experience dreams of fear, anger or some kind of conflict. And third is the state of Ne-Swapna where there are no dreams. This is the deepest and healthiest state of sleep, the closest to Brahmalok As soon as Vinobaji use to wake up, without the use of his alarm clock, he would check his watch. Upto to 2 minutes late, he used to forgive himself for "sleeping in". Beyond that, he used to scold himself for sleeping extra -- which he considered a sin to body. 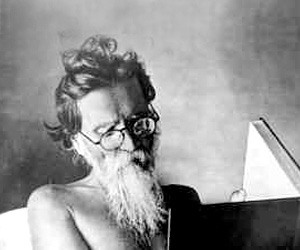 On Samatvam (Equanimity): A group of about 20 people joined Arun Dada, who was on his way to meet Vinoba-ji. One woman among them joined with an intention of seeking blessings from Vinoba-ji so she can conceive a child. After reaching the destination, that woman made an offering of a coconut to Vinobaji. Vinobaji took that coconut and put on his head and said, "If you conceive a child, then be sure to maintain your equilibrium. And if you don't, then also maintain your equilibrium. Whatever the condition, Samatvam is the highest blessing."

Practice of A-Swad: Vinoba-ji had a strict and measured diet because of his stomach ulcer. Dada shared how he use to chew each morsel for 20-25 times, be it Cheno (kind of sweet) or castor oil. In both the conditions, the expression on his face use to be the same. Inspired by Vinoba-ji's practice, Arun, to this day, doesn't swallow medicines with water. Instead, he lets the medicine be in his mouth to thaw. 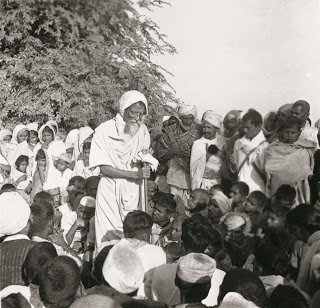 Broadcast vs Deepcast: Someone asked Vinoba, "Why don't you broadcast the Bhoodan message through all the various mediums?" He would let it spread through word of mouth and reply, "I don’t believe in 'Broadcasting' but in 'Deepcasting', where the spoken words directly touches the heart of the listeners. At one point, a few reporters came to interview Vinoba. After posing a question, they started the audio recorder to capture his response. Vinoba-ji did not speak for a long time and so the reporter switched off the recorder. As soon as the reporter did that, Vinobaji said, "Your device knows how to record words, but not silence."