Last Scene Of The Drama :)

We share gratitude on behalf of many in America, who are grateful for Arun Dada's visit -- just after his first circle. :)

Last Wednesday, Arun Dada spoke at our Awakin Circle, as Professor Pandya elegantly translated! He opened with a Kabir song, with a translation -- and by the time he closed with a song, none of us even needed to know the meaning. Moved by Love. So many touching transformations. He has a growing list of invites, to build on his already overflowing itinerary.

Jiggy has been in full form, trying to frantically document all his stories. And given her last name, we keep remembering the Pilgrim Pandyas too. In the photo below, we are not sure if Jiggy Tai is modeling her new sweater, doing gardening, or just doing a dance of joy since Arun Dada has agreed to increase his weight by 3 kilos. :) 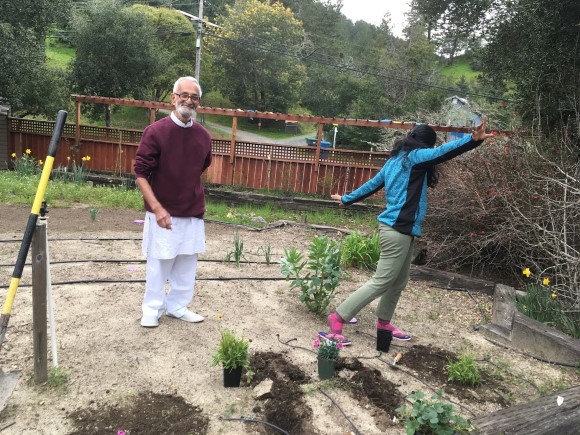 Arun Dada himself has been all smiles (and straight-out laughter many times of the day) -- and is particularly in love with Agave, after Guri's introduction via a chia-seed dessert. :) If there's an agave bottle on the table, he'll tap his index finger on the table for seconds. :) On this trip below, they actually went looking for an Agave plant -- and found it. :) 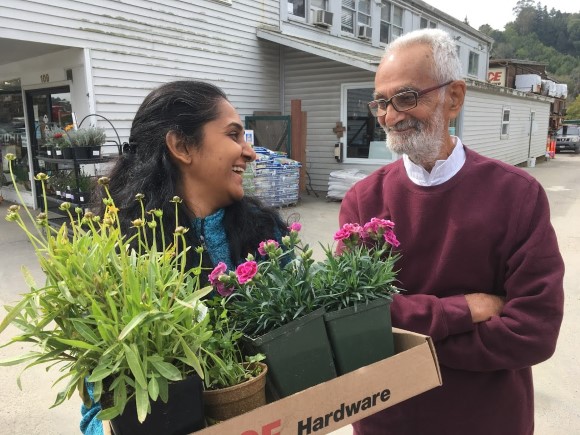 "Old Tree" is also counting her blessings, while learning phrases like "atma sayyam" and "nirgun" and also cracking up Arun Dada when she says phrases like "pati gayu?" to refer to, "Shall we leave now?"

Post Awakin, this really sweet couple -- meditators, whose two kids have done ServiceSpace internships in the past -- insisted on having Arun Dada and Jiggy over for lunch. And here's a true story. At one point, Arun Dada starts explaining Gandhi 3.0 and "many to many" precisely in those words. Classic! 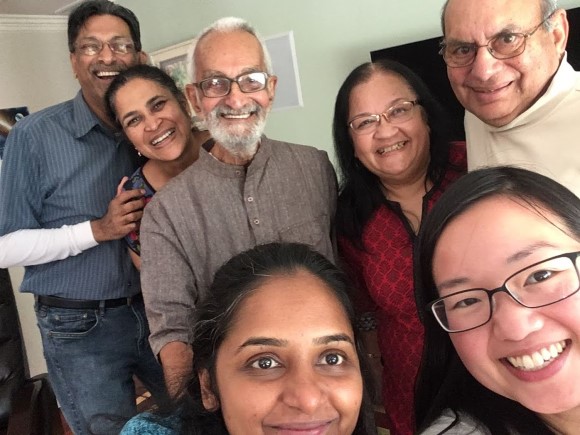 Today, they are off to find Pancho somewhere on his walk. When Arun Dada heard some of his audio posts from the pilgrimage, he said, "What should we do for him?" He decided to fast for a meal. When Pancho learned about this, he decided to fast for 24 hours, in gratitude for Arun Dada's fast! You wonder what will happen when they actually meet. And after that bonanzo, there's another evening circle in Berkeley. The masti never stops around here.

For tomorrow, Audrey's main goal is to fulfill Bhumika's wish and treat Arun Dada to some ice-cream -- which then leads us to wonder, "If a Gandhian walks into an ice-cream parlor, what flavor ice-cream would he have?" Not vanilla, we hope. :) (And yes, we have a growing list of those questions, starting with, "If a Gandhian is late for a flight, would she be running?")

We are grateful for all your ripples over the years that allow such a trip to manifest. Even the simplest of things, like Banyan Grove, has been a Jai-Jagat ripple of Gandhi 3.0. We all play our small part with sincerity, and somewhere, in some due time, someone experiences a transformation. It's a thing of beauty.

After each selfie, everyone smiles in remembering Arun Dada's quote from Vinoba (after someone took his photo): "Last scene of the drama!" Arun Dada smiles the widest -- after the photo. :)

Definitely not the last scene of the drama. :)