Celebrating the journey of 14 years, 14 days and 14 hours of Seva Cafe with a gratitude circle with 50+ volunteers in person and holding hundreds in intentions!

Circle begin with gratitude towards an old couple, who didn't have much for themselves, yet offered all they had to Jayesh bhai and Anar didi for their lunch. The spirit of love and compassion touched their hearts deeply. Recalling the experience, Anar didi shared that, that moment triggered a thought - did we ever host anyone with such love and care ? The eternal spirit of "Atithi Devo Bhava" (guest is God) of our country is lived in our culture, what can we do to manifest it in mainstream. With that intention a circle of few friends heart stormed and from collective conscience the idea of Seva Cafe emerged. On 5th Oct 2005, Seva Cafe - the noble intention got manifested in physical space on the pious day of Dasehara.

Bhavnaben (founder of Utthan), recalled the night of 4th Oct, how relentlessly everyone were working to manifest this noble intention. While many people were thinking whether it would work, survive for even a few months and it thrived. Seva Cafe became home to many families and children of Utthan, serving humaneness in children with mental disorders. Expressing her joy on completion of 14 years she shared, in all these years hundreds of people came and went Jayesh and Anar remained the same.

Gratitude Cirle begin with an all religion prayer, followed by lighting of lamps by the pillars of Seva Cafe family - Raju, Bhaskar, Ajay, Chinmay and many more while offering gratitude to all known and unknown volunteers who poured in their hands, head and heart. 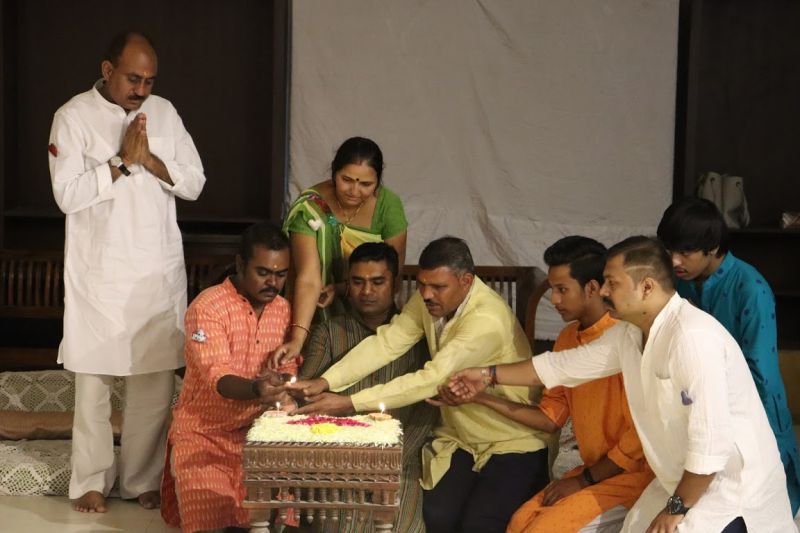 Sandeep shared that for him Seva Cafe is like a temple. He recalled how his life evolved and revolved around Seva Cafe. Feeling grateful to Chinmany, he shared, he was young when it begin but to See Chinmay who was just 8-9 years of age, would come to volunteer and serve, he used to feel inspired. Chinmay shared that he didn't realize that now he does orientation of other volunteers. The same Chinmay who would come in a chaddi (half pent) is now a lead volunteer anchor of Seva Cafe. What an incredible journey!

Bhaskar often shares that Seva Cafe gave me my surname, he asks people who know him to check their phones and tell what is the name they stored ? Chances are its Bhaskar Seva Cafe. Right from the inception Bhaskar served and loved Seva cafe for 13+ years. Now, in his explorations and travels, wherever he visits just the name "Seva Cafe" opens up homes and hearts of people. He believes that Seva Cafe is an intentions and it thrives in every heart. 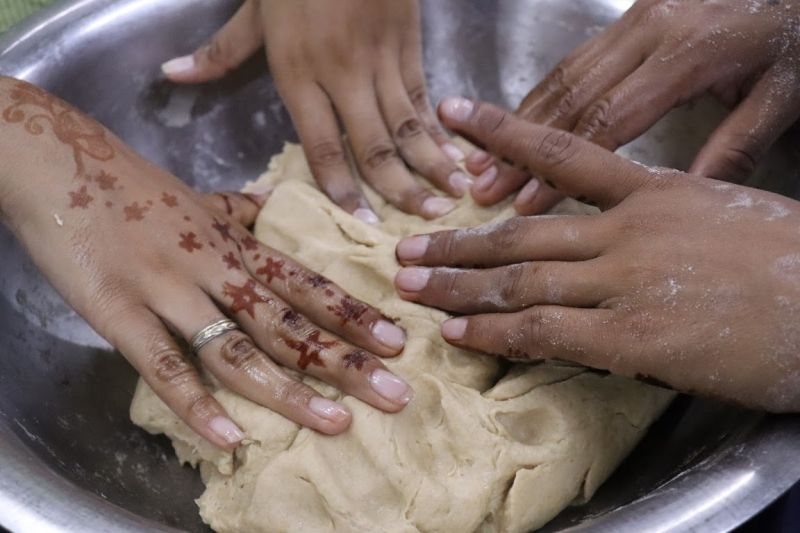 Raju, who joined Seva Cafe within few week of its inception and now laddering the kitchen, felt deep gratitude sitting in a circle with family members (non blood relation) - with whom - he cooked, served, ate and loved. When he started didn't know cooking at all and now people come to him to learn to cook. One of the volunteer shared that, he used to volunteer in 2013 and observing Raju, he learnt how to cook. Simple things like chopping vegetables with love and care taught him immense lessons and now takes pride to be a good cook while sharing credit to Raju and volunteers at Seva Cafe.

Udaibhai shared that Seva Cafe is the mother who feeds and he is Seva Cafe's son who takes people around in his unique ricksaw. For last 10 years, a ripple of Seva Cafe, Uday bhai's ricksaw and spirit surprises people in Ahmedabad.

Someone handed mike to Rajpalji, he is a street hawker, and as soon as he finishes his business, he comes to Seva Cafe to do dishes. With his loving authority, its difficult to find a turn to do dishes if he is around. He shared that Seva Cafe is Kamdhenu and Kalpavriksha (entities that grant any wish to come true) and that many of his wishes came alive at and because of Seva Cafe.

Father of Ayushi, youngest volunteer at Seva Cafe, feels immense pride that he can come and volunteer on any day at Seva Cafe. Raju shared that Ayushi is volunteering sine she was 6 years of age and Pintoo Bhai would carry her in his arms. Now Ayushi guides the volunteers at the kitchen.

A group of volunteers shared that they have created sub-groups so that every one can get a chance to volunteer at Seva Cafe. Given limited volunteer space, earlier they use to fight to decide who is going to volunteer from their group. Reason, they all feel at home. Bhaskar shared that in the locality Seva Cafe operates, there are many hostels. Hundreds of students feel at home when they visit Seva Cafe.

Ajay shared that once there was guest. She was sitting and dining alone, observing her meticulousness and special asks Bhaskar reached out to her to provide the best of the experiece, he learnt that she is expecting and her whole family wanted to eat outside while she was looking for homemade food. She mentioned that her family is dining in a nearby restaurant while she is here at her home "Seva Cafe". While Ankita and I were expecting, it became reality for us as well. Her office is close to Seva cafe and often we would come to Seva Cafe to have our dinner. Remembering those days, Maitri's first birthday was also celebrated at Seva Cafe. This abode, has hosted and lived most intimate moments of many people.

Few days back, some one from Uttar Pradesh visited Seva Cafe and asked one of the volunteer, I feed 3000 people every day. Isn't my seva bigger than Seva Cafe ? To that Robin, who was interacting with the guest shared that the intention behind the seva matters, not the scale. Later evening, he showed dustbin of the seva cafe - it had almost zero food waste, witnessing the spirit of volunteerism, this gentleman from UP decided that he would bring some changes in the way he operates his langar and he invited Seva Cafe team to visit him,
Robin also expressed deep gratitude to Jayesh bhai and Anar didi for manifesting and supporting this noble intention subtly and invisibly. He found his expression through Seva Cafe. 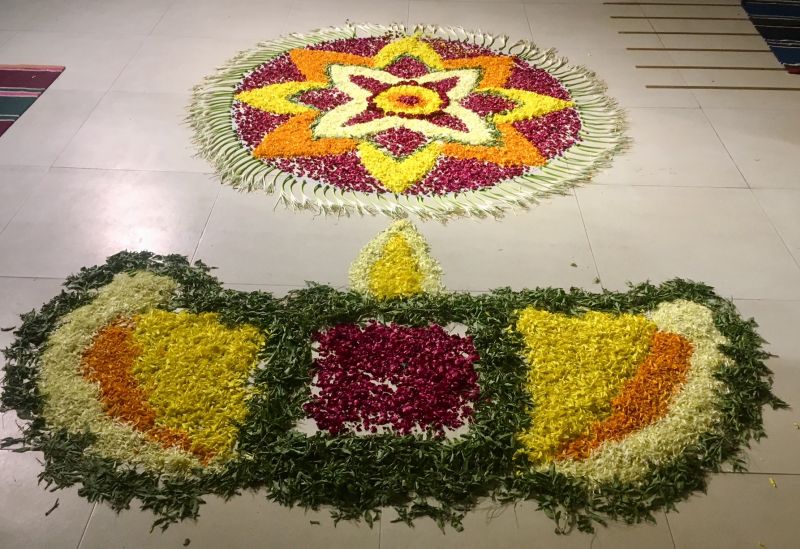 Devesh is serving at Seva cafe for last 5 years. He made a beautiful rangoli and conveyed all he wished to express. Diken recalled his first forced volunteering at Seva Cafe, later it became a regular phenomenon and now its home to him.

Jayesh bhai:
"Anandmayi, Chaitanyamayi, Satyamayi Parme" this space brings alive noble intention of "Bliss, Consciousness and Truth, inviting the Supreme within.
In many ways Seva Cafe lives the spirit of Gita, not expecting any fruit in return. The idea of “अतिथि देवी भव” is eternal, that got its unique expression through Seva Cafe.

There is no group or specific team that owns it, and that’s the beauty, it’s owned by society. It served humanity while devoting to the society “व्यक्ति की सेवा, समाज की भक्ति”. When one operates from the spirit of Neither I nor We, but by thy will, a sacred space gets created within and around.

Recalling the incident shared by Anar didi, initially both Jayesh bhai and Anar didi started offering tea to strangers in their homes. Champa, a vegetable vendor was one of the recipient- when Jayesh bhai reached out to her asking if she would like to have a cup of tea, she graciously shared - if you would offer, I would have. And over the cup of tea, they learnt about the journey of Champa who would wake up at 4 in morning, buy vegetables, carry them in a basket (12-15 kgs) on her head and would walk street after street to sell and with the earned money 25% of profit would be used to feed tomatoes to dogs - everyday!!! This conversation led to multiple ripples while building immense trust. The roots of Seva Cafe are in that deep trust which is beyond any kind of transaction.

Over the years Seva Cafe has become a space to host individuals, groups and families - serving projects, creating platforms while deeply cultivating practices with the intention to “be the change”. Hundreds of thousands of ripples of Seva cafe must be wavering in the air, there is no project report, no impact report of what has and is emerging through this manifestation of noble intentions with consistent cultivation of known and unknown; visible and invisible forces.

Later 40 guests who serves Seva Cafe's intentions joined in, including an Orthopedecian - who doesn't charge a penny if someone mentions of Seva Cafe, a heart surgeon who did 32000 heart surgeries operations - moved by the spirit of Seva Cafe decided to tag each patient with a plant and a heart pin 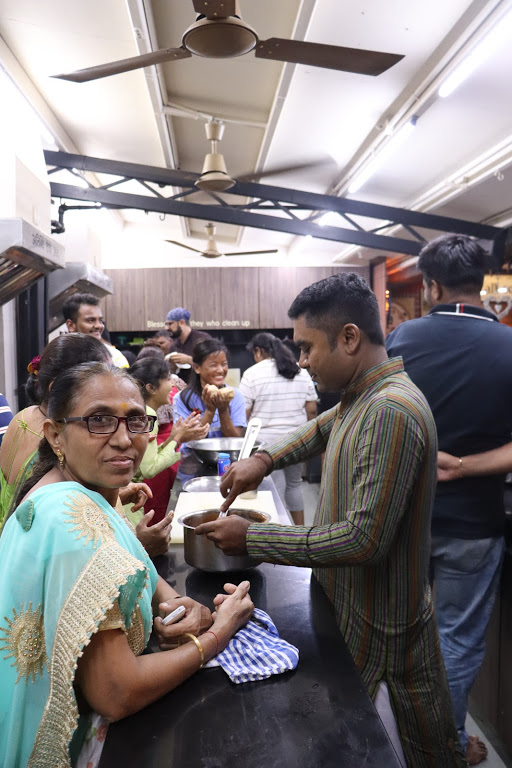 As the day was concluding, we found Josephji along with many volunteers silently sneaked in the kitchen to do the dishes. While everyone was a volunteer, few present in person, many more in spirit with their hearty wishes - stepped up from the space they were operating - both in external and internal dimensions. 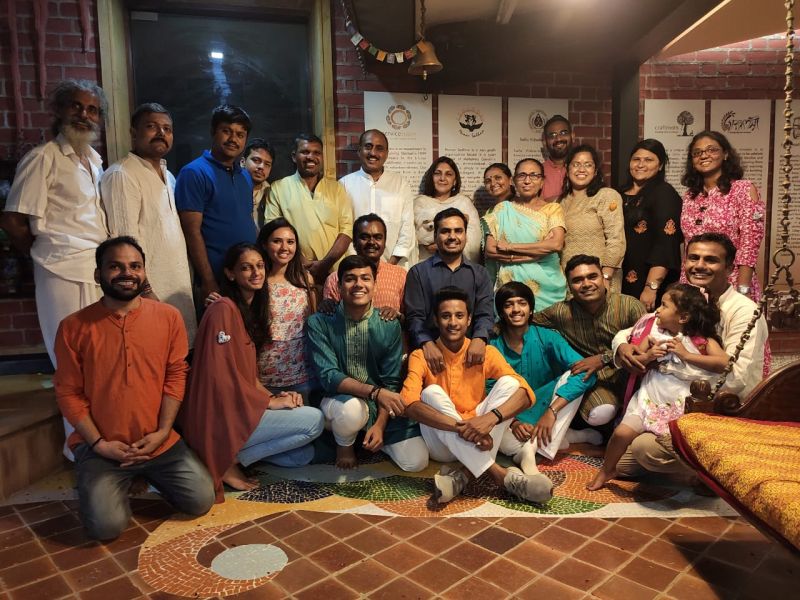