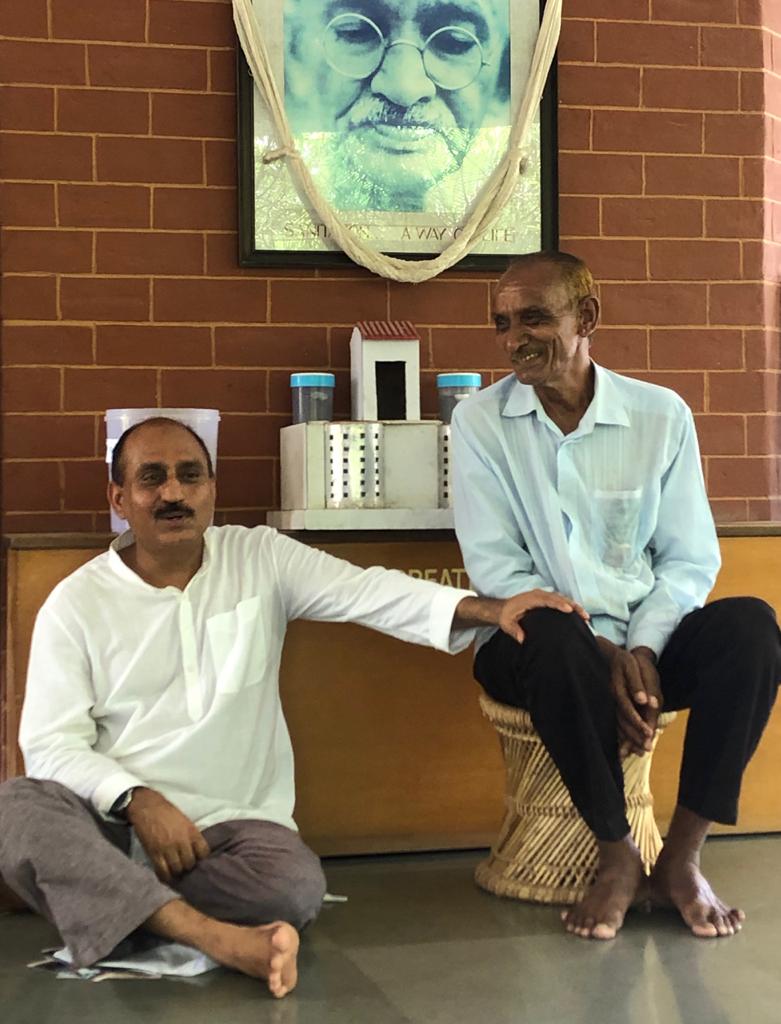 “I dedicate myself to this space until my last breath, only my bier (dead body) will go FROM this space.” Amrut Kaka shared on his birthday celebration on 26th June 2020m (above pic was clicked same day). Of almost 7 decades of his life, he spent last twenty years at Environmental Sanitation Institute(ESI).

Right from the time, when the land for ESI was procured, Amrut Kaka is associated with it. He is the one who witnessed the journey of this barren land (with 1-2 trees) to nourishing Maitri Space with hundreds of trees and birds.

Our beloved Amrut kaka had his last breath at Maitri Space in his room (named Hanuman) on afternoon of 12th July.

We bow down to his spirit of surrendered service, his soulful presence and his oneness with the campus, with the whole ESI family and each corner of the Maitri space including the trees that were taken care by him right from inception. 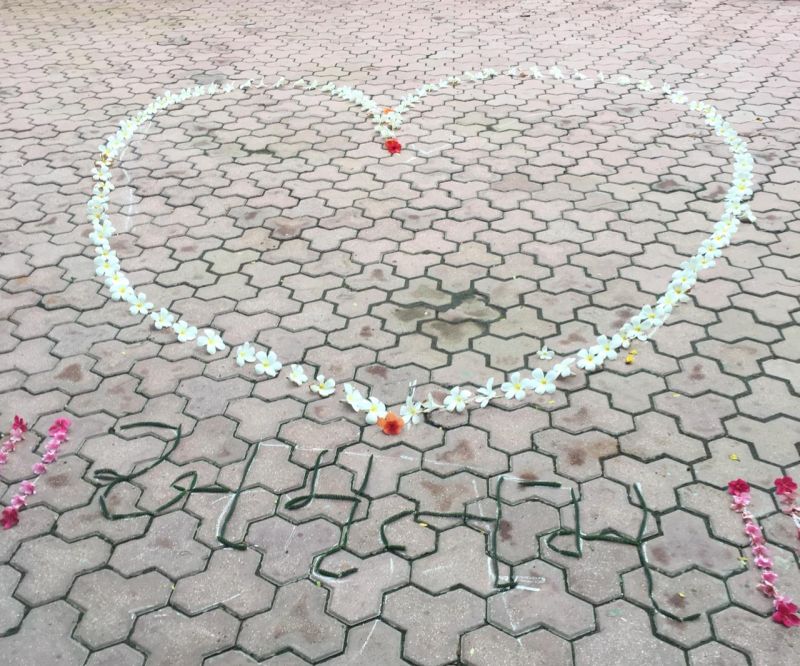 In tribute and his relation with the trees, Jayeshbhai shared – let’s request the trees to give flowers as its one of their brother’s last journey. A heart of flowers was made and his body was kept in the center. When body was taken, the empty heart became empty again but it wasn’t the same, as void held virtues lived by Amrat kaka his whole life.

On 13th July, after his last journey a pilgrimage from ESI to funeral ground close to Gandhi Ashram, we sat in a circle of prayer and gratitude for Amrut Kaka.

Jayesh bhai recalled multiple incidents of Kaka's dedication, consistency and surrender. Amrut kaka had Pratyaksh Darshan of the whole journey of the evolution of the space. Meeting his wife, Jayesh bhai expressed his profound gratitude to her for letting Amrut Kaka serve at ESI. 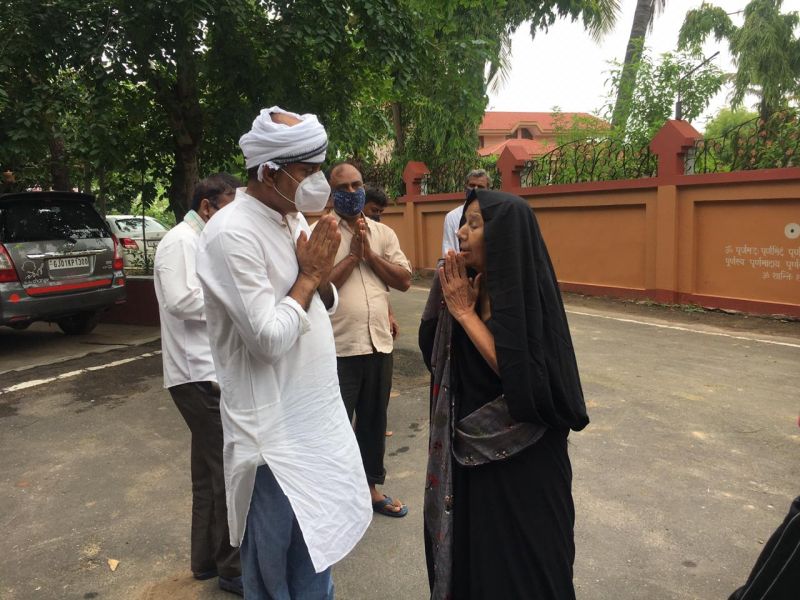 He was the one who spent maximum amount of time in ESI space. From watering the plants (now trees) to guarding the space to sweeping the path to ensuring electricity and water conservation to greeting each entrant with a smile, he left his presence with each act performed dutifully.

My first deep introduction to him was from a Karyakarta- who said- Amrut Kaka is an example of incredible consistency, you can set your clock by his schedule. At 6 AM and 3:30 PM sharp he will be with his broom to sweep the path. At 7 PM sharp he will ensure lights to be on and at specified time to switch it off.

Shailesh, one of the friend of ESI was around him during the last hour, he shared that in his initial day he switched on two additional lights and when Amrut Kaka learnt he reprimanded him. While sharing, holding tears in his eyes Shailesh said-Amrut kaka later apologized to him, that day onwards he never wasted electricity even at his home. Amrut Kaka was also in-charge of water management; his vigilance caused neither dearth nor wastage of water – in this huge space. He would sit on a specific bench until the water pump is functional.

His hospitality and connection through “Jai Shree Krishna”/” “Namaste” or”Jai Mata Di” . With people who are frequent visitors, volunteers – he would greet each one with warm smile – making them feel welcomed at home. Even at wee hours, he would ensure to welcome people with care. A volunteer shared, once Amrut Kaka asked him to not to jump the gate, as he may face an accident. He may ask him to get up at any hour, he will personally ensure opening and closing the gate.

Self reliance and resourcefulness- he would cook for himself, occasionally he will eat with all in Annapurna. One of the ESI family member shared that when he would arrive at odd hours, finding kitchen shut, Amrut Kaka would come as savior and would cook for him – food of his choice. He would use the broom made by himself.
Recently, he made a mask –stitched with embroidery of his choice. One of the volunteer observed that when one of his mask was torn, he stitched it on his shirt making it a pocket.

A space in himself: He would create community in his own ways. He would sit with people in front of campus, would have camp fire during winters, would share his mobile phone with those who don’t have on. Vishnu (one of the gardener) didn’t have a phone, Amrut Kaka found Vishnu’s schedule and availed his semi-smart phone to Vishnu for entertainment. He would have toffees with him to offer to young or old. He would visit Sughad village regularly, he made incredible relations there. As people in village found about his demise, hundreds of them sent deep condolence.

Amrut Kaka’s relation with animals- particularly with dogs and snakes was phenomenal. He would offer his prayers outside campus in a small temple worshiping Goga Maharaj (snake God).
Mamu shared that he spent maximum time with Amrut Kaka, when no one would be around (during festivals) he and Amrut Kaka would celebrate Diwali together. On many occasions Amrut Kaka refused to go on tours/pilgrimages sighting – who would ensure safety of the space if all of us would go!

In his presence - no one can do anything wrong – if he would find misdeed by anyone, he would say it on face. He wrote many letters – appreciating work of others and also sharing what can be done better. One such letter was written by him on 10th July 2020 (just two days before) – the last quote mentioned – “Jab Bijali vyarth jalti hai, mera dil jalta hai”, when electricity is wasted, my heart cries.

His duty at the parking was unmatchable, if any influential person’s driver wouldn’t follow appropriate parking saying – you don’t know who (“Hasti”) has arrived, Amrut Kaka would say – everyone is “Hasti” famous and “smiling” who come here, no one come here Rothi (crying) and would ensure the driver parks the vehicle appropriately.
Ashish bhai, who is his neighbor for longest duration, shared – Amrut kaka was like Hanuman. When Ashish would go away for some work, having Amrut Kaka he felt incredible safety for his wife Heena and daughter Kaveri.

Amrut kaka has physically gone from the space but his virtues shall be there, each `member` present in the prayer circle committed oneself to give tribute to Amrut Kaka by imbibing one of the practice – expressing gratitude to the virtues he cultivated. Jayesh bhai would often say- Amrut Kaka has no exit policy, and now when his body has left the campus, but his virtues would be nourished and nurtured in the space as there can’t be any exit of virtue, once imbibed.

“Amrut” means nectar, he would be forever remembered by ESI family for the virtues he lived and cultivated until his last day.
May his soul rest in peace, we pray for his family.