"There is no purpose to life, there is no meaning; like everything else, I simply live," explains Swami Sachchidanada candidly. It quickly becomes obvious that this is not your run-of-the-mill orange robed Indian Swami. One might even imagine a disillusioned man behind this statement, except that this is a man who left home 40 years ago to find Truth and still runs three ashrams today. Within a minute of speaking with him, he becomes a living paradox, a riddle to experience.

With 1.25 rupees in his pocket, Swami Sachchidananda left home as a 21-year-old ascetic looking for the ultimate Truth, capital T. Within an hour of leaving home, a beggar asks him for some money, he gives away all the money he has and spends the next entire year without a single rupee on him. Following that year, he ends up in Kashi where he spends 12 years learning and teaching Sanskrit. Many spiritual guru's request him to be their disciple, but it isn't until he runs into Swami Muktananda (not the famous one from Bombay, but a lesser known saint from Punjab) that he finds someone who "wasn't attached to money or sex."

"You see, fundamentally, there are two primary problems to solve in life: the money problem, and the sex problem," Swami Sachchidananda declares. "If anything, the purpose of life is to solve problems. If you don't have your own, solve other people's problems," he adds, half jokingly. 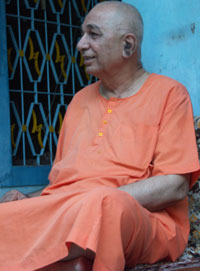 As someone who has written over 50 books, has daily syndicated columns in national newspapers, and has traveled to more than 70 countries, Swami Sachchidanada has some strong -- and liberal -- opinions about life. And he's not afraid to express them. "We should be modern. We have to live in the present and grow in the future" he says. Swami-ji refuses to accept any disciples and believes all things good should be your teacher. "People have to experiment and find out their own truth. Don't just take something because someone else says so. Go out and have the guts to be wrong, to fall flat on your face. That's how you learn."

The business of India's miracle men, the celibacy frustrations of most monastic orders, and blind beliefs of people's faith are all toimages he has a lot of experience with, and toimages he has strong opinions on. In his autobiography, "My experiences," Swami-ji shares several miracles attributed to him that in reality are not so miraculous. One time, because he's a speedy walker, there was a lot of dust around him when he went for his evening walk; a young boy, behind high fences, only saw Swami's face and thought that he manifested from thin-air! The young boy fell to Swami Sachchidananda's feet, and pretty soon, people in all the nearby villages started flocking to him despite his repeated explanations to the contrary.

Swami-ji adds, "Also, this whole celibacy thing amongst the monastics is all out of control. A young kid is taken into an order, without his choice, and then he goes through extreme measures to control his celibacy. This is all wrong. Most people in this country have really misconstrued ideas about religion."

"Observing, traveling, and reading are my three teachers today," Swami Sachchidananda shares. Although he speaks affectionately about his own guru, Swami Muktananda, he feels that perhaps even his teacher wouldn't agree with many of his beliefs today. But that's ok with him. Ideas, beliefs and strategies have to evolve with time. Gandhian ideal of khadi is really outdated, he feels; for decades now, he has favored globalization. Religions like Jainism and Islam, he says, are very extreme; one is impractical while the other is very exclusive. For Swami Sachchidananda, spirituality without science is blind; if you can't objectively rationalize your beliefs, they aren't very meaningful.

When you ask him if he believes in God, he eloquently says: "Everything is God." After a pause, he continues further, "You see, life is full of problems. You will solve one and another one will crop up. This is the nature of life. Still, you just have to keep solving the problems. It isn't your job to worry about the outcomes. You leave that to God."

That, in a way, is his path. He keeps on solving problems that surface near him. After over a dozen years of searching for enlightenment, he came to the conclusion that his whole search was a hoax; there is no enlightenment, no reincarnation, nothing. At one point, when he got sick, villagers said, "But we thought you were a saint; how can you get sick?" Much to his surprise, they refused to take care of him, thinking him to be a phony. "That's when I decided that I will have a small little place as an ashram, where I can be sick. Through the grace of God, I got enough royalty from my writings that I was able to make it happen," Swami-ji says. 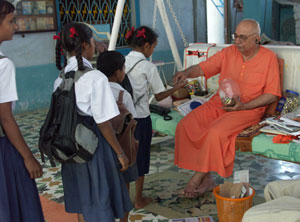 And once he solved his problem, he started solving other people's problems. At his ashram, he started keeping old folks who didn't have a place to stay and couldn't take care of themselves. He created a free medical center for the villagers, an eatery for any hungry person to eat, and a buttermilk stall for community members to be cool in the hot summer days. Most recently, they started selling wood for a token rupee, so that poor villagers can have a decent funeral. Daily, all the neighboring kids come to his ashram on the way home from school; they bow down to receive his blessings, along with a candy or two as 'prasad'. The ashram is run by volunteers who stay there for varied amounts of time.

Bit by bit, Swami Sachchidananda keeps plugging away at problems. He is not worried about when problems will end, he is not afraid of his own death, he is not interested in achieving anything. Because he doesn't have any personal problems, he keeps solving other people's problems.