He doesn't know when he was born. Nor does he know who his parents are. His earliest memory, from when he was 2, is of being taken care of by a group of wandering monks, each of whom were intense in their sadhna. After they landed up in Petlad, a small town in Gujarat, they all took off within two days. Except 10-year-old Swami Harisevakdass. He stayed back and fifty years later, he is still here.

Walking from Nadiad to Petlad, we notice a curious combination of a Buddha and Ganesh statue on a big gate. We also notice a water fountain, so we meander in to fill up our water bottles. Within a minute or so of talking to some locals, a slightly hefty gentleman with a bare chest walks up to us and invites us to lunch. Maybe we had "food" written all over our face, or maybe it was something else. Either way, we gladly accept.

Loud yet serene, boisterous yet composed, hefty yet huggable, joking yet sincere, it is Swami Harisevakdass who invites us to lunch. We don't know him, and he doesn't know us. Only difference is that we want to know who he is, while he already seems to know who we are. 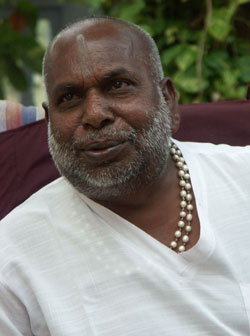 "I was raised, quite literally, by many sincere saints. They all were very deep in their sadhna, some would meditate 7 hours of the day without stopping. So spirituality for me was second nature. I don't know life without it," he said while sitting on a swing surrounded by many trees.

After being trained by his Guru at a local ashram, he set off on many pilgrimages all across India. Some by foot, some by train, some with just one 'lota' (jug) and a 'kantan' (cloth). On one of those pilgrimages, at a Ganesh festival in Pune, he felt a deep pull to create a Ganesh temple in Petlad.

Without any resources, he came to Petlad and found a barren tree on some remote land, built a hut for himself, and started meditating. He didn't need much and was able to survive without any problems. But after several years, he felt that his sadhna -- which he learned as kid from the wandering saints -- was too selfish. From within, he had a longing to serve the entire world. And again, he remembered his vision of creating a Ganesh temple.

So he prayed: "If this is your will, give me the energy to make it happen. I am at your service, God." And sure enough, it started happening. Bit by bit, someone would drop off cement, someone would donate bricks, someone would find laborers who wanted to help, someone would coordinate, and so on. Heck, they built the temple but didn't have an idol until someone dropped that off one day too. It's almost unbelievable.

When asked of his participation in the temple, Swami Harisevakdass laughs and says, "I didn't lift a single brick. Actually, all I really did was pray."

Today, thirty years later, you can still feel the sincerity.

Hemantbhai, a daily attendee at the temple, agrees, "I'm telling you, this man has a direct connection to God. He does these huge events, and just tells me to spend a few lakhs even when there's no money in the account. And then he'll say, 'It'll come by tonight' and sure enough, it's there. This whole temple was built like that, 30 years ago." Even beyond the temple, Hemantbhai has reason to be pumped-up about Samrat Maharaj, as the locals call him; after losing everything in the stock market, becoming a depressed alcoholic that was involved in all kinds of negativities, it was Samrat Maharaj that has turned his life around, 180 degrees.

"I don't ask anyone for anything. I never have. Expectations is what creates problems. Whoever it is, I just serve them. If a person is naked, give him some clothes; if someone is hungry, give him food; if someone is thirsty, give him some water. That's it. That's all service is," Samrat Maharaj describes his simple theory of life.

For him, the spirit of service is the only thing that truly contributes; the actual act of service evolves naturally. No act is too big, or too small. At the temple, prayers happen every morning and evening for the community; anyone travelling through the roadside can always have a place to eat without any questions; there are two simple rooms for pilgrims to rest. This is service. Community members who can't afford a big hall for marriage can use the land next door for big events. They've even invested in a TV which is strictly for the entertainment of the street children for an hour everyday. Tons of passerbys stop to touch the seemingly palpable peace that permeates the temple grounds, many of whom don't even know Samrat Mahraj. "Help someone in need. What other service can man do?"

And if you hang around the temple enough, it's not hard to spot that inspiration in the most minute happenings. The caretaker of the ashram was born at the ashram, perhaps left behind as an orphan, and now she is 30 and living a content life of service. When Samrat Maharaj needed help at the temple, the current temple administrator left his home on the farm opposite the temple to serve; although he sees his family everyday, he said he will continue staying at the temple until the next help arrives. He has been there for an entire year.

"Your laboratory is the whole world. All you have to do is find God. And then share the joy with others!" Samrat Maharaj declares in his naturally upbeat tone.

Over the years, people have come to know of him. Very rarely does he go out of the temple, but sometimes people get him to talks and special occassion prayers. "When I speak, I speak spontaneously. No plans until I get to the mic and then I speak whatever comes to my mind. Always," he says in a very believable way. But he is quick to add, "I do it but I don't like to do this worldly stuff. I have so many more important things to do at the ashram, like my prayer and sadhna."

It's pointless to ask him about the moment when his spiritual transformation occurred. Because he doesn't know: "Since my earliest memory, I have always known God. Nothing else is real."

At the temple, there are no weekdays or weekends. Everyday is a chance to serve mankind, to wish goodwill for all of humanity, to pray for insight into our true nature. "God is everyone. Inspiration is everywhere. Help anyone doing anything," Swami Harisevakdass says as if that's his life's motto.