The scene is tense. February 27th, 2002. Communal riots are spreading all across Gujarat, and the government has imposed a national curfew to contain the situation.

One week passes, second weeks passes. Things are under control in many places, but in various Muslim pockets across Gujarat, tensions are mounting. Many are being burned alive, many are walking in open public with swords, policemen appear to behaving in random ways, no one was feeling secure.

In one such city of Baroda, one woman is fed up with the unease. Hamida A. Chandul had seen almost 500 mobsters coming to attack one Muslim youth; she had known women being raped; she had heard gun shots while praying with other Muslim women, not knowing if she will be alive. And now, she has had enough. 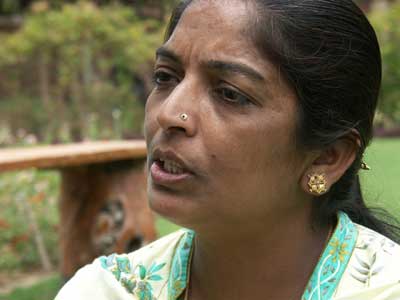 "We cannot live like this. Either Allah will take us to him or he will rescue us," she tells her friends. What they do next is so bold, so radical, so gutsy, that no one could believe it.


Instead of hiding from the bandits, she went straight to them.

"The night before, a bunch of Gandhian activists were at my house. No Muslim was accepting them, but I had spoken to them once before, so I sort of trusted them. I called them in for tea and they slept the night at my place," Hamida recalls.

At 4AM, Hamida secretly goes into town to get some milk for guests. Most households are scared to go out to buy vegetables or supplies; they pay a little bit extra to have some entrepreneuring youth who take the risk. No one had much money, but everyone was praying that the situation would improve soon.

On the way to get milk, Hamida meets another friend. It turns out that a young Muslim man, Hamida's friend's relative, was just killed. In fact, mutilated. Because Muslims are in a serious minority, they can't even dare to go out on the streets to ensure a proper funeral for their deceased loved ones.

It's a little past 4AM, and this is the final straw for Hamida. Instead of getting milk, she calls home and wakes up her Gandhian friends. "We can't live like this. Either we are going to die or live with dignity. This is not right," she says.

"We are thinking of doing a non-violent protest, a rally on the streets. It's dangerous, it's risky, and anything could happen. But we have to do it. Will you join us?" the Hindu man on the other side of the phone, Jagdishbhai Shah, proposes a seeming solution to all this irrational mob behavior. Jagdishbhai is himself a fearless legend, having walked thousands and thousands of miles with Vinoba Bhave.

"No Muslim would intiate such a thing, but someone has to take the risk. You are good Hindu people and if we don't support you, we will be practically doomed. I would rather die than to have this for my kids, my community," Hamida thinks out loud on the phone.

"YES! I will do it. Let's start right this morning," Hamida exclaims on the phone, not thinking about how her husband or two kids will react.

"You understand that we will be in full silence, no matter what others say. If someone does something, we will not react and behave in a completely non-violent way. Anything can happen," Jagdishbhai warns Hamida, from his decades of exprience with such rallies.

"Yes, I'm ready to die. Or anything else. If we all keep on fighting, we will all kill each other. This has to stop, and I'm ready. You have my full participation," Hamida agrees with her whole heart.

She buys some overpriced groceries, to ensure that there is food for the day for her family and rushes home. There is no way that her husband, Abudrahim B. Chandul, could stop her. "She is very motivated. And the kind of fear we were living in, something had to be done," Abudrahim says.

The rally starts. 25 men, 25 women. Hamida was able to convince a few other women and men. Admittedly, lot of the men were in full rage and plotting other violent responses but most did keep an open heart for this to work.

"Instead of the mobsters coming to hunt us down, we are going to them. We'll make it easy. We are here. Go ahead, do what you want. We will not do anything in return," Hamida says of the spirit of the rally.

50 people isn't really intimidating, considering that the Hindu mobs were numbering in hundreds and hundreds at time. But 10 out of 50 were themselves Hindu, 40 were Muslim, half were women, and all 50 were committed to a non-violent response.

Their argument of interconnectedness and peace is so compelling, that not a single soul is able to do anything on the streets.

The rally proceeds for half an hour, until they notice a mass movement up front. It's the police.

"I have never seen that many policemen in my life! I mean, we are only 50 non-violent people but here were hundreds after hundreds of police coming for us," Hamida says with a slight glee.

Police had come to arrest them, for "disturbing the peace". Jagdishbhai instructs the crowd to not cooperate with the arrest. They all lock their hands, and sit down. Quite literally, there are more than 10 policemen -- with all kinds of weapons -- for each one of them. It's a real scene.

One after another, each of them is picked up from the street and thrown into the police van and taken to jail. By the end of the day, their friends get them released.

For six straight days, they rally in the thick of the tension. No one, not one person, retaliates. All the local newspapers write about it, and there's a huge buzz about it on the streets.

Hamidaben recalls, "It actually worked! People saw that we were humans too, and it created a possibility of living together in peace." Following those six days, tensions in the neighborhood started easing, Muslims actually went out to buy their groceries, and Hindus and Muslims spoke to each other.

"To this day, unfortunately, there's still some tensions that remain. 80% is removed, but 20% is still there," Hamidaben says. "People have to be better educated. We can't do some crazy things because someone gives us 50 rupees. But ultimately, if true peace is to be achieved, we have to, we have to realize our common humanity."

May all the Hamida Chandul's of the world stand up.