It's the big story. A village woman with 7th grade education goes to the Ramakrishna Mission to become a nun; they reject her because she doesn't have a college education. So she finds another teacher, who has been in silence for 12 years. He instructs her to serve the world. Without any money, without any house, without any other resources, she builds a hut on a wasteland and invites a few village kids to play everyday. That woman was Anuben Thakkar, that year was 1978, that project was called Muni Seva Ashram. Twenty five years later, Muni Seva Ashram is a 300 acre social service project that is known throughout Asia.

That's definitely a big story. But there's an even bigger story that is so small that it almost can't be seen.

It is the story of Vikram Patel, a young doctor who comes to Anuben's hut just as she is starting the Muni Seva Ashram. As a medical school student, he agrees to come every Sunday to do health checks on the kids that come to Anuben's hut. 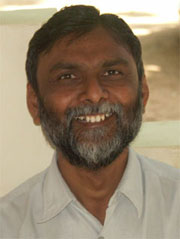 Vikram is the third oldest amongst four siblings, and by far the smartest one. In every exam, he's a gauranteed first; no matter what the challenge, he's ready to take it on. "If he's in front of car, he would be the best mechanic. If he's in front of the patient, he would give the best diagnosis. He was good at everything," Vikram's father recalls. Parul Patel, Vikram's younger sister remembers, "His thoughts were always different since his childhood. He would trade in my comic books in the library for books by Vivekananda! As a elementary school student, who would want to read those books? Only Vikram."

With his stethoscope around his neck, Vikram would sit on a small stool under a tree every Sunday. Medical check-ups and medicine prescription for one villager after another. One day, during a routine visit to see Muni Maharaj -- who had inspired Anuben to start this project -- Muni Maharaj tells Vikram's mom, "Don't let your son leave Goraj. This is where he belongs."

Migrating to a Village

Turns out that Muni Maharaj is right on. A year or so later, when Vikram graduates from medical college, Anuben asks him to stay in Goraj to work with her. And Vikram agrees, much to the surprise of everyone. Instead of living with city comforts, he would live in a village hut without any running water or electricity; instead of making lots of money, he would be a volunteer for a project that isn't gauranteed to survive even the next year.

"People are greedy because they don't know their real needs. Man's real need is joy. When you lose that joy on the inside, you start looking outside," Vikrambhai confidently says when asked if he misses comforts of security.

By 1982, there are two huts on the Goraj wasteland. One is residence quarters, and another is a kindergaten during the days, kitchen during meal times, and hospital during the other times.

Since the Muni Seva Ashram doesn't operate on pre-meditated plans, its programs evolve based on the forthcoming needs of the community and the available resources. Once-a-week patient check-ups for Vikrambhai turns into an indoor facility where patients can stay, which over time expands into a pathology department. When they received a sewing machine donation once, they start an employment program for the village women who are 10th grade graduates. Unfortunately, no one comes because there are no such graduates; very quickly, Muni Seva Ashram expands it's education program to 10th grade.

In 2001, Anuben unexpedectly passes away. No successor is named, no plans are made. "For Anuben, she was just an instrument of service. This was Muni Maharaj's ashram and he would guide its direction, although he had passed away," Dakshaben says. In a quiet corner at Anuben's funeral, a few very well respected saints brainstorm for a few minutes and name Vikrambhai as the next leader of this ashram.

Today, the Muni Seva Ashram operates programs focused on agriculture, education and medicine -- a nationally reknowed cancer hospital, a senior center, several schools from kindergarten to 12 grade, agricultural programs to free farmers from market forces, a school for the mentally challenged and a cow-shed to name a few. It's also quickly becoming an impressive model for sustainabile use of technology. "In India, we are big into recyling. An old saree becomes a towel, an old towel becomes a napkin, an old napkin becomes a cleaning rag. Similarly, at the ashram here, we make use of everything from the cow dung to leaves on the trees to wasted water," Vikrambhai says. The ashram produces its own grass; cows eat the grass and produce milk; cow dung is used to produce bio-gas that is used to cook farm-fresh food; superfluous water is used for irrigation, plant and human waste is used to create manure for the farms, and so on. 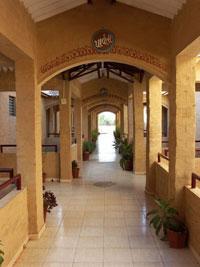 A whopping 70% of the resources needed on the 300-acre campus are generated in house. "In five years, I am quite confident that we'll be 100% sustainable," Vikrambhai says of his technology brainchild. If you go to the bathrooms, you will see automatic sensors on the taps to conserve water; if you visit the cancer hospital, you will see fully air-conditioned patient quarters run with wood-gas gacifier; if you will go to their office, you will find wirless Internet access. His passion for technology benefitting humanity is obvious and he sees no problem in the combination of science, technology and spirituality. Vikrambhai notes, "Man shouldn't lose his focus. We have to build technology for humans, not the otherway around. But there's nothing wrong with appropriate technology that helps us, that reduces our burdens."

At the Muni Seva Ashram, you can find humanity, technology, and spirituality. But there's one more unique element that is immediately evident as you enter the premises: beauty.

"Gandhi provided the emphasis on satya, Truth. Vivekananda provided the focus on spirituality. And here, Anuben added a third dimension to our work: beauty. She took great care to make sure there was a sense of natural beauty at the ashram," Vikrambhai says.

That aesthetic element is strikingly evident throughout the ashram. With 60 foot palm trees, nicely cut grass everywhere, beautifully architected buildings, elegant decorations, anyone feels good just by being there. But many utilitarian social workers argue that you could use these large areas of natureful trees, to farm and feed the hungry. To that argument, Vikrambhai counter back, "We are here to give joy to people. Who is to say that the joy which a dying cancer patient feels in a serene atmosphere is less than the joy of giving a farmer an extra egg plant to sell?"

To top it all off, perhaps the most striking feature of the hospital is this: nothing is free, but every service is on a pay-what-you-can basis!

Villagers come here to get free help, international patients travel thousands of miles to get cutting edge medical care, and city folks in dire situations can even get shuttles to make it here. Naturally, there are cons who take advantage of the system but Vikrambhai says that 20% of the clients will end up paying 50-100 rupees, 50% request about 50-60% concession, and 30% pay whatever is suggested. All the deficits are made up for by donations. It's hard to believe that such a large scale operation can work in this way, but Vikrambhai sees no big miracle in it. "I always knew the value of money. I know what it's worth but I also know what it's not worth," he says.

Whenever bills would show up, the resources would miraculously appear through some person or another. "It's kind of weird. No MBA's can explain how this multi-crore institution surives, but still it's here," says Tusharbhai, a neurologist at the Muni Seva Ashram hospital. 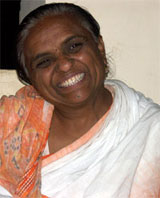 Dakshaben, who was the first teacher to volunteer with Anuben, remembers: "In the beginning, we had absolutely no money. For years, we would go out every night to the villages, explain what we're doing and ask them to give us some money. Ten rupees, fifteen rupees, whatever. It was very painful." But one day, Muni Maharaj gave them a rare piece of operational advice: "From tomorrow, you will no longer go to the villages asking for money." Sure enough, they stop and interestingly enough, from that day, money has continued to flow from different sources. Today, the ashram is worth many hundreds of crores with a daily burn rate of more than several hundred thousand rupees; all clients pay-what-they-can and a few others donate. Still, no one is worried about how the ashram will survive. They believe.

Vikrambhai has never taken a dime in salary in his 23 years of service. He only eats two bhakri's for dinner and sleeps on the floor every night. He never married so he could serve the needy. He only owns two pairs of clothes, which are given to him by his friends. Few years ago, he adopted two 'adivasi' (native) daughters that he takes care of. His spirituality is very unimposing and practical, yet he meditates daily. And when he stands up from his "chief of the ashram" chair to say goodbye, you notice that the seat of his chair is torn in many places. You feel his humility, straight in the gut. And the most humble factoid: he didn't mention any of this in his interview. In fact, outside of this story, he has never agreed to a profile about his journey.

"Our bottom line is joy. We are here to share our joy in the world," Vikrambhai declares with a glee that clearly shows that he's being the change he wants to see in the world.