It is a routine first-class train ride. Atul Shroff turns to his wife and tells her, "There's a 3-acre proposal to start a hospital in a village where we are building a new plant. Are you interested in leading it?" Shrutiben Shroff gives him an answer that would change both their lives forever: "No." 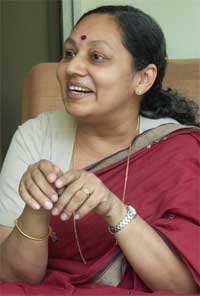 Shrutiben goes on to explain her divergent ideas: "I want to go deeper than just having a name-sake role. And in place of a long, drawn-out, 5 crore proposal to help a community years later, I would do it right now. Small things with big heart. I've never run an institute but if I ran it, I wouldn't measure how many surgeries a hospital has done; instead I would see how many surgeries were prevented by the hospital."

They talk till they reach their destination, and then forget about it. Until six months later.

"I get a phone call and Atul says, 'Can you come to speak to the Shroff Foundation board and share the ideas you were telling me in the train that day?' And before I could say anything, he tells me he's already sent a car," Shrutiben recalls. A little nervous and a lot off-guard, she goes in to address a board room full of powerful business people. She speaks her heart out for half an hour, and then one gentleman makes a trite comment: "You are talking about nine different things - water management, health, animal husbandry and what not. You understand that people have spent lifetimes trying to solve just one of these issues."

Shrutiben, a sweet, middle-aged woman with a quiet ferocity, retorts back, "Well, I know one thing. I'm a mother and when a mother wants nine children, she doesn't wait for the first one to be 20 before having another one. Likewise, if we are sincere about making a difference in this village, we have to create a holistic approach."

After that meeting, the Shroff Foundation timidly agrees to give her a little bit of money, and two years of time to implement her ideas.

Shrutiben comes home and does the one thing she always does when she's at a turning point in her life - visit "dada", her father-in-law and mentor. After hearing that the foundation gave the reins to her, Dada proudly exclaims, "Today, Atul has done the best thing in his life!"

Before Shrutiben has time to process everything, she is already on her way to the village -- Kelali. She has no idea what to do or where to start. For the first few visits, she does art and crafts with the kids under a tree. Slowly, she gets to know the children and learns of the community's water problems. Then the fathers of the kids start coming and tell her of the bad crop that year. "I didn't know a thing about agriculture but still, they would try to show me what was wrong," Shrutiben says. One day she brings a small camera to take photos of the bad crop, shows the prints to some experts that her father-in-law knew of, and shares relevant best practices with the farmers to avoid the same problem in the future.

Bit by bit, she keeps working to the best of her ability. She would work with the village kids everyday, especially since she had those skills. "When my daughter was in nursery, I would volunteer at her school. Then she passed out of nursery, but I never left," Shrutiben laughs in her characteristically gentle manner.

Her daughter has been her teacher in many ways. At the age of 4, she passed away due to post-measles meningitis and left all her family members devastated. Shrutiben tried everything to get out of her deep remorse, but nothing helped. It was then that her father-in-law, Govind C. Shroff, taught her about spirituality, karma and detachment. He gave her books about Ramakrishna, kept a close eye on her, and inspired her to find that love for everyone, through service.

After her daughter's death, Shrutiben tried to cope by helping other sick children at a local hospital. At one point, she got really close to a 4 year old girl who, incidentally, suffered from the same post-measles meningitis that her daughter had. Unfortunately, this girl also died and that too, in the arms of Shrutiben!

"This was too much. It was very very painful. I was a very active person, always doing things but now, I had lost all motivation to do anything. I suffered a lot," Shrutiben remembers. "Dada, again came to my rescue. We would talk a lot about life and death, God and finding that divinity in others. It took me a long time, but I eventually did come out of it."

It is after all this internal turmoil that she gets involved with the Shroff Foundation and goes to the village.

Solving one problem after another in the village of Kelali, Shrutiben also experiences the subtler principles of life. One day, she learns of an epidemic with the village cattle. While she's struggling to find a solution, a retired gentleman shows up at the door and with folded hands asks, "Can I help in your work?" Coincidentally, he was veterinarian! "I don't know how he found out that I really needed help. And I never found out. When you do this kind of work, you feel that this is all someone else's design. We are just instruments. You experience lots of grace," Shrutiben says. They go to the village, find the problem, vaccinate the cattle, and rescue the villagers yet again.

After saving the cattle, she attempts a basic health education program with 30 women. The first day when she tries to invite the women, they all slam the door on her face. Shrutiben says, "Since I was interacting with the men, they didn't trust me. They thought something was going on. They were the toughest to win over." The next day, word got out about how the women treated her and almost over-night, there was a complete turn-around in their attitude. And the women's program starts.

Next season, when the cotton crop is ruined again, Shrutiben realizes that she needs to start a training program for the farmers. With the help of her family's contacts, she puts together some of the brightest brains and arranges a first-of-a-kind workshop for the farmers. It's a wild success, which adds further momentum to all of the existing programs in the village. Before long, a small hospital and community health clinic is running; art program for the kids, agricultural training and animal husbandry initiatives for the farmers, along with water sanitation and women's empowerment work, are all going on simultaneously and in harmony with one another.

Her nine children were born, much to the surprise of the Shroff Foundation board members. And that 2 year time limit? "They never came back to rate me. It's been twenty years now, so I guess I must be doing ok. But now, I want that 5 crore hospital," she says while cracking into a huge laugh. The foundation now operates with an annual 6 crore budget and employs 117 social workers to carry out the programs. 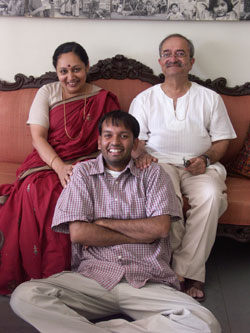 Most recently, she went to visit a 'adivasi' (native) village and was deeply shocked to see their primitive conditions. "Not four out of the four hundred children were healthy. There were no plants or animals, because the Adivasis eat everything. They have no other choice." After getting a city tour, by a naked guy holding a bow and an arrow, Shrutiben was in tears: "The only difference between them and animals was that the animals live on trees and they lived on the ground."

When 'Dada' hears of Shrutiben's experience, he is himself moved to tears and says, "Whatever you do, Shruti, don't say no. For me, please don't say no. Go and help them."

Sure enough, the next day Shrutiben initiates the project. She assembles a top-notch team and moves into the village for several months. All her family members fear for her safety, but everyone knows that once Shrutiben's heart is set, there is no stopping her. Within five years, the villages around Chota-Udaipur are radically transformed because of her efforts. And their work is still continuing.

'Dada', who has always been Shrutiben's guiding light, also dies in her arms after suffering from lung fibrosis. It turns out that she now has the condition. But she isn't worried. "I've experienced an intense joy and satisfaction within myself by doing service, and it's hard to explain in words, how much I've received from it. I'm deeply satisfied with my life."

Throughout her life, Shrutiben has fought fierce battles; many within herself and some with circumstances. Yet instead of becoming hardened, she seems to become more and more unthreatening, loving and gentle.

True to her motherly nature, she recites a nursery rhyme from her daughter's kindergarten days that reflect her own path:

Tick, tock, tick, tock Says the clock, What time is it now? The time to be happy is now. The place to be happy is here. And the way to be happy, is to make people happy. and to have a little heaven right here.