It's 2AM. Police are blocking off entire streets, newspapers haven't yet printed these headlines yet, fear is quickly spreading throughout the city of Baroda. Communal riots, between Hindus and Muslims, have just started in Baroda in 1993.

While most are asleep, one man wakes up and heads out to the worst affected area to do a non-violence march. It's one thing to protest after an event takes place, but it's another to go right into the eye of the storm. 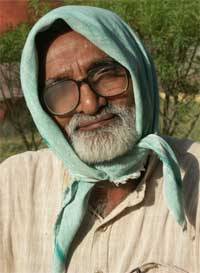 Jagdishbhai Shah is just a one-eyed man in his sixties, walking with a stick on two broken knees. Yet, he feels more like a one-man army. His family members are worried, his friends in the police department try to dissuade him, but they can all foreshadow Jagdishbhai's response: "It is a command from my soul. It is a voice from within. I must go."

But this is no one-act-wonder. It's one of many fruits from a full life of cultivation, a life time of not owning anything, not having any money, and not asking for anything. For Jagdishbhai Shah, life is an experiment in grace.

On 15th August 1953, nineteen-year old Jagdish Shah decides to leave home. Every night, for the last month, tears have been rolling down his eyes. While it didn't make sense to leave his parents, his promising medical career given his first rank in school, or the inevitable discomforts of a life on the "streets", he knows he wants to do something deeply meaningful. "What's the point of just living and dying? I want to do something for mankind, I want to serve," Jagdishbhai says to himself.

His dad threatens to disown him, but he's still committed to his decision. He starts walking, with one pair of clothes, a book and a bed sheet but without a plan or a direction. On the second day, he visits a reknowned Gandhian activist by the name of Babalbhai Mehta. Previously, Babalbhai had rejected his offer to join him since he didn't have parents approval. But today, Jagdishbhai shows up and says, "This is not your decision. This is my decision. I have left home to serve." Impressed with the young man's conviction, Babalbhai accepts him.

19-year-old Jagdishbhai is too civilized for the rural life, though. He doesn't know how to clean the ashram, wash his clothes, or cook for others. Yet he's determined. Babalbhai sends him to a Gandhian boot-camp of sorts, where he spends a year of 4AM-10PM grind with prayers, hand labor, cooking, spinning, weaving, cleaning toilets and what not. Jagatram Dave, who administered that Gandhian school, later tells Babalbhai, "This boy will remain forever in this work." And he was right.

Naturally skilled at writing, Jagdishbhai is sent to West Bengal to document a seven-day series of Vinoba Bhave's talks. 'Baba Vinoba' is the most prominent successor of Mahatma Gandhi, who is walking across India to inspire rich land owners to donate land to the poor. Despite the overwhelming success of his movement, people are drawn to him because of uncommon spiritual strength. "Gandhi said he was a common man. He did experiments with Truth and openly said that he was still learning. Vinoba, on the other hand, made no such claim. He never took back anything he said, and like a true sage, he spoke with crystal clarity. He was almost a service machine, a super-man, you can say," Jagdishbhai says of his teacher.

At age of 25, Jagdishbhai's mother passes away abruptly. Reflecting over her funeral pyre, Jagdishbhai affectionately recalls his mom's one wish for him -- marriage. Having been confused about marriage for a while, he decides in that very moment that he will get married.

"But who will marry me? I have no family, no money, uncompromising values, a shaved head and a goofy look," Jagdishbhai jokes. One of his friends suggests a co-worker, Manjuben Shah, who shares his Gandhian values. 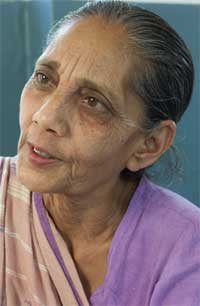 "He was very staunch in his values, and I was myself more formally educated and opinionated; but we were trying to pursue the same things in life, so it seemed right. My uncles didn't approve of him initially but ultimately, they trusted my decision," Manjuben recalls. She is also impressed with his intellect and general knowledge, despite lack of formal college degree. "But one thing is for sure -- I definitely didn't marry him for his looks," Manjuben laughs.

At their wedding, six friends attend. They can't afford a big wedding. In fact, Jadgishbhai didn't even have a pair of long pants, so he borrowed one from his friend.

Doctors tell Manjuben that she can't have kids; yet, she miraculously delivers Kapil and Bharat over the next ten years. It's difficult to raise them with Jagdishbhai's principles of non-possession; "So many times, I would wonder how we will be able to send our kids to school, but someone or another would always come to help. You just have to stay committed to your principles," Manjuben says with a sagely smile. Both her sons became outstanding scholars: Kapil, the older one, runs several organizations to raise awareness about organic farming and Bharat is a doctor who runs a Nature Cure Center.

Manjuben's strength is apparent. Despite being 4 feet, 8 inches tall, she commands a presence; she is a strong personality who is humble enough to adapt and powerful enough to stand on her own: "At the end of the day, though, I still do believe that you should work to earn your bread and not just rely on God to bring it to you." Yet she has no regrets in life. With genuine humility, she adds, "I have never really had any problems in life. I never had anything, so I never felt like I sacrificed anything."

"The first 25 years of my life were extreme austerity. And then I became God's beloved son; the last 25 years have been nothing but grace. And I can feel it. Daily. Right here, inside me," he says thumping his chest. It's easy to believe him.

Following Vinoba Bhave's death, Jagdishbhai gets close to another saint by the name of "Swami". No one could take Swami's photo, no one could record anything about him, no one could become his disciple, no one could talk to him on the phone or make an appointment. You just show up, and if he's there, he's there. Jagdishbhai quickly becomes one of Swami's favorites and one of the most pivotal spiritual experiences in Jadgishbhai's life is the "grace of Swami".

Still, Jagdishbhai can't be classified in the religious category. Sometimes he'll even classify himself an athiest. "Do I believe in a greater energy beyond our ego? Yes, absolutely. After farmers sow the seed, they eagerly await the rain; only after that shower does the farmer get the crop. In the same way, we have to just sow seeds. Only when God's grace is showered, will the crop be delivered. Without that energy, we can't be successful." 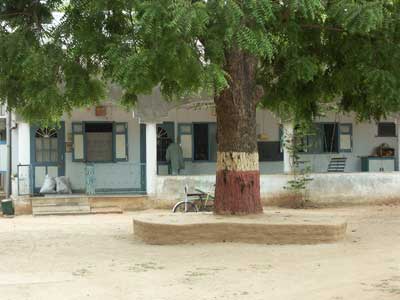 Jagdishbhai doesn't own anything, doesn't have a personal bank account, and doesn't ask for anything. It's been a vow he has kept since he was 19, when he shaved his head and left home to "do something worthwhile".

Over the next 52 years, he has done lots of worthwhile things. He walked thousands of miles to get land for the poor, he established a family with two children while staying true to his austere values, he wrote many books and was the chief editor of Bhoomi-Pootra newsletter for decades, he grew a barren land into a thriving ashram for nonviolence, and time and time again, he has put his life on the line to promote compassion in dark corners of humanity.

Through all those years, he has learned to graciously take what is given and fearlessly give what is taken. When he lost his left eye, he was happy to realize that you can survive just fine with one eye. When his knees prevented him from walking, he was happy to know that he could slowly move around with a stick. Likewise, when Vimala Thakar -- a famous Indian saint -- sends him 25,000 rupees for knees surgery, he gladly accepts. When an anonymous donor drops off a brand-new, 15 passenger van at the Vinoba Ashram in Gotri, Jagdishbhai isn't surprised at all. He relies on such miracles everyday.