Big, round flashes of light blind us for a moment. Loud, honking sounds zip past us. The howling, almost-monsoon wind pushes us from East to West.

Just then a faint plea reaches my ears: "Son, I can't see too well. Can you hold my hand?"

It is the voice of Biharilal, an 80 year old man who is looking for his six cows that hadn't returned from their grazing. With his crooked walking stick in his right hand and my right palm locked in his right hand, we aimlessly take one step after another through the dark farmlands along the Bombay Highway.

"Dada, I don't think you'll find your cows like this," I make a rational plea after walking for a while with him. In his calm, confident, and cracked voice, he replies, "We must still look."

Soon enough, I will realize what a gift the universe has delivered, quite literally, into the palm of my own hands.

While many lives are at the mercy of uncontrollable circumstances, there always seem to be those few exceptions that can mess with destiny as they please. Biharilal is one among those few.

In his teens, Bihari was a brilliant high school student but his father didn't see the value of education. He would rather have him run the family shop. Convinced that he wanted to get a college education, Bihari left home at midnight one night and took off for Bombay. It was a gutsy move: he didn't know anyone, he had absolutely no idea what he was getting into, and as a farmer's son, he had never even been to a big city like Bombay. But he went. Not only that, he managed to get admission into a work-study college and worked exceptionally hard to survive. Bihari slept in a corner of an onion and potato warehouse, ate bananas, groundnuts and jaggery for meals, studied in libraries and under street lights ... all to finish his education. Soon after securing his job, he happily reconnected with his family. :)

Biharilal's yearning, though, was for something much deeper than getting a job. He wanted to live life fully. In his ongoing search, at the age of 22, he took off again! This time his destination was the Himalayas. He would walk and walk, without any money or any resources, completely in the hands of the universe for over two years. He ate jaggery and nuts, met and stayed with many saints and many kind householders, and learned a whole lot about life. Dada likes to say, "You see, I was a migratory bird." After a slight pause, he bursts into a huge laughter: "I still am and always will be." It's his nature and he's proud of it.

As he was getting older, he pondered about spiritual life, marriage and settling down. Once again, Bihari was intent on coming to conclusions based on his own experience; so he went hunting for more answers. He decided to spend a year with four 'brahmachari' saints whose writings and thoughts he respected: Rabindranath Tagore, Vinoba Bhave, Sri Aurobindo and Tukdoji Maharaj. "I wanted first hand experience about their spirituality," Dada remembers.

Of course, these are larger-than-life saints that millions would want to spend time with but no challenge is too big for Bihari! He not only managed to spend extended time with each of them, but he left a lasting impression at each of their ashrams. Vinoba picked Bihari to help him initiate the Bhoodan movement and even gave a lecture on his spirit of service to inspire like-minded folks. When Tukdoji Maharaj -- a Maharastran saint who would easily have hundred thousand people lined up for any impromptu talk -- was on his deathbed, he insisted on having Bihari next to him. Mother, at the Aurobindo Ashram, knew Bihari really well; two of Bihari's sons and a daughter were born at the ashram (some still live there today) and Bihari's wife passed away at the ashram in 2002.

Involved with the freedom movement, Gandhi's Satyagrah movement, and many other movements, Biharilal's life itself makes a statement. He got married at 35, had six kids, and lived a self-reliant life on a farm of Igatpuri. When his wife was eight-months pregnant with their last child, Bihari made perhaps his most irrational plea -- "Let's go to the Aurobindo Ashram." Everyone in his extended family thought he was crazy to travel a few thousand miles with an eight-month pregnant wife; but he told them, "Mother is going to die soon at the Aurobindo Ashram. I want my last child to be delivered under the grace of her blessings." With 4 young kids, 17 bags and one very-pregnant wife, Bihari relocates his family to Pondicherry. Sure enough, a week after Puneet was born, Mother passed away just as Bihari had predicted.

Biharilal never had a lot of money when raising his family, but it wasn't about that for him. He trained them to listen to their inner voice -- today, all six of them have different occupations ranging from a lawyer to an artist to an entrepreneur -- and be bold enough to follow that voice. And his life was his greatest testimonial. When his youngest son, Puneet was interested in learning the flute, he got him a flute; when Puneet's teacher said he needed a "better" flute to advance further, Bihari got him that also. But because he didn't have the money, he fasted for 3 months to save meal money for his son's flute.

Such is this man Biharilal.

And here he is looking left and right across the Bombay Highway for his cows. "One of them has dots on it, her name is Radha. Another one is just a calf. Another was named by a poet friend of ours -- Gauri," he goes on to describe all the cows. He loves his cows.

Dada has a very cute habit -- in the middle of describing something, he will quiz you on it. "Ok, now you tell me, why do we eat? It's a six syllable answer." He will nudge the answers in the right directions, until it's the right one. "Ah yes, exactly. We eat so we can use our bodies to serve others."

"Dada, dada," I say in an excited tone, "I see a bunch of cows crossing the road, up ahead." Curious he asks, "Where, where?" He can't see them in the dark, but I point to them in a distance. "Nipuni," Dada's even got a nickname for me by now, "I will wait here, but you take my stick and try to turn them around. Go, go." Just before I go, he yells, "But be very careful. Don't go too far."

An engineer-turned-pilgrim-turned-cow-herder? Bring it on!

Through the dark, pot-holed farms, I go behind the cows. At one point I think of turning back, but then I see Dada sitting confidently on a small stone, looking fearlessly at the blank horizons he can't see. I remember his statement, "Still, we must look." Regardless of the outcome, still we must do our duty. I try to use my stick to guide the cows back, but the closer I go towards them, the further they run. For a good half an hour, I try and try. But no luck. With a disappointed tone, I come back to inform Dada, "Dada, I couldn't even get near them." Reassuringly, Dada tells me, "Don't worry. They must not be our cows. They must be late in going to their own homes, so they were probably running." 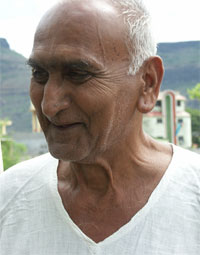 Eventually, we decide to end our search. Dada walks very slow and we're quite far from where we started. To speed things up, we opt for a short cut. No lights, no pathways, but even at 80 fearlessness hasn't left Biharilal. We walk for about ten minutes. With his stick, he feels something in front of us -- barbed wire. "I haven't been in this area in ages. Wow, they have put up wires now?" Dada says. We are royally lost with a metal fence in front of us, late at night, with a grandfather who takes three seconds to move one step forward. This is not good news.

But then this 80-year-old man's life flashes in front of me. If you ever want to be lost, this is your man.

"Let's go left," he says. Right then, in a faraway distance, we see someone flashing a light. Without wasting a moment, Biharilal exclaims, "See, God sends us help right when we need it. Always, always."

We are safely led to the Biharilal's house. It turns out that someone else found the cows, who had indeed lost their way, but they are now safe in their sheds.

Before Dada loosens his tender-yet-firm grip on my right hand, he quizzes me again: "Nipuni, you tell me, what is the Truth about life?" After a few guesses, he kindly offers the answer: "Whatever happens is the truth. That's it." And then he laughs, as if he's one-upped the Nature by unraveling its secret. Dada loves to laugh.

Just like that, it all flashes in front of you: I was holding a hand that has worked for decades to stand up for principle, a hand which has served humanity at the risk of its own livelihood, a hand that has touched the feet of dozens of legendary saints. His are hands that have held many a precious and sacred gifts from the universe; yes, but, his are also hands that have had the wisdom to let go of all of them so it can hold even greater truths.

Dada lets go of my hand to walk peacefully into his home. I follow him inside. He is our host tonight.

If Dada quizzed me again, "What did you learn today?" I might respond: "Don't ever be tight fisted; you never know what might fall right into your open palms."