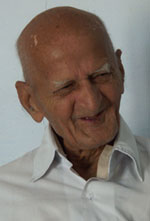 "Dear Mom and Dad, I am leaving everything to find God." Fourteen year old Prahlad Patel left that note for his parents and took off. Before Prahlad could find God, though, his parents found him.

"My parents weren't upset at me, though," 81-year-old 'Dada' laughs heartily as he recalls his childhood. "They were very spiritual themselves and in a way, they understood this intense desire to find something greater than the self."

About an hour ago, as Guri and I were entering the small town of Matar through the barren river-side road, we speak of Sri Aurobindo. Almost within ten seconds, we read a board on our right -- "Auro Center". Compelled by serendipity, we cross the front gate to find the main office.

It is not only silent, but very peaceful.

An old man, dressed in all white, slowly walks down the stairs and greets us with a radiant toothless smile, "Welcome." After a minute of hello-ing, Dada tells us that this ashram is taken care of by Mother and he points to a picture above him. "She has never let me down," he says only to be stopped by tears in his eyes.

Seeing an 81-year-old man cry, I tear up myself. In the presence of his pure devotion, I think to myself: "Whoever this stranger is, I would feel privileged to be of service to him." Not knowing how, I make something up: "Dada, I would like to profile you. But, really Dada, it's just an excuse to be at your feet and learn. Can I ask you about your life?"

Dada cracks up. "If you want to know about me, no need to ask; just watch my actions for two days and you'll know all you need to know." True to his grandfatherly fashion, though, he happily fields our questions. And practically knocks us out with his responses!

Although he doesn't know it, Dada has one thing in common with Reebok: life is short, play hard. Outside of a small piece of remote land, Dada doesn't own anything and doesn't have a source of income; he put every single penny he had, all 65 lakhs worth, into this 3 acre Auro Center. And he has no fears about tomorrow.

"How did you become so convinced of this center?" I ask. "Mother granted me a vision in 1993: go start an ashram where there is no pollution, is amidst nature's beauty, and is near a river; it will be a place for the most sincere seekers of God." It is a vision that has never left him.

With the help of an engineer, he drew the detailed architectural plans from his vision. After almost seven years, he found a piece of land suitable for such a place. He had no experience running an ashram, in architecture or construction or fundraising, and neither did he have any resources handy; yet, in 2000, he put it all on the line to start the construction. "Mother has kept me alive to do this work," Dada says with confidence.

"Aren't you worried about what will happen tomorrow?" I pose a layman's question. "No," came the saintly response. "This is Mother's will. I'm just an instrument."

At the age of 25, when Dada first visited Pondicherry Ashram in Southeast India, he met 'Holy Mother' at the Aurobindo Ashram. "I would watch her for hours and hours and not get tired," Dada recalls with a prayerful glee. "And whatever I would ask her, she would give me -- chocolates, blessings, her ring once, you name it." It was during that trip that Dada made a silent pledge that has shaped the rest of his life: "From this moment, I give you all the responsibility for my material and spiritual well being. I am your instrument of service."

He later got married, and had two sons. Because he was farming in a remote area, he started a small school to educate his kids; Mother named it "Mirambika" and today, the school is still running in Ahmedabad with 3000 students. Unfortunately, one of his sons passed away at the age of 42. "What was your response when your son passed away?" I pose the question with curiosity. "I was sad, but I didn't cry. I don't know why, but perhaps because I understand that birth and death are inevitable parts of life. Incidentally, he passed away while he was visiting the Pondicherry Ashram, several thousand miles away from his home," Dada says.

Dada's life is full of unusual happenings. Once on a farm, he woke up with a poisonous snake in his bed; the snake had been there all night but didn't bite him. In his twenties, he picked up 'Gospel of Sri Ramakrishna' and everytime he tried to read it, he couldn't stop crying. So he finally gave up on reading it but holds Sri Ramakrishna as a revered teacher. When he went to buy land for Auro-Center, the person selling it was in such an unusual situation that he had to donate the entire piece of land. One after another, Dada's stories can captivate anyone for hours.

Two mentors of Dada's life were Govardhanbhai and Dixitbhai, both of whom were central elements of his spiritual path. Govardhanbhai, his Dad's friend, hosted him when he was in college; while there, young Prahlad volunteered for one curious job -- he would serve water, tea and snacks for a group of 6-7 folks, including Govardhanbhai, who would meet regularly to discuss the writing to Sri Aurobindo. "I didn't understand much, but whatever little I picked up, I was impressed by Aurobindo's thoughts," Dada remembers.

Dixitbhai, his other mentor, was the first person he met when he initially walked into the Pondicherry Ashram. While Dixitbhai was very close to Sri Aurobindo and Mother, 25-year-old Prahlad didn't know; they just naturally became friends. "Slowly, I realized the power of Dixitbhai. One time, he told me to read a book and he was sleeping next to me, snoring. My mind wandered off a little bit and I made a mistake in responding to one of the questions; he woke up and told me exactly where I had faltered! This happened again and again with him. I think he was aware all the time." While it was not in his character to prophecize, he did make one prediction: "Dhananjaya, Ambalal and Prahlad will surely gain self realization." All three were true disciples of Sri Aurobindo, according to him.

"Do you pray, Dada?" Guri asks him. "Yes, everyday." "What's your prayer?" Very sincerely Dada says, "No set prayer. I let it happen naturally. First, I make a full bow to all the realized masters and ask them to help me realize my true nature. Then, I sit in silence and let prayer happen." Dada sleeps from 9PM to 1AM; after waking up, doing some exercise, he's in prayer from 4AM till dawn.

In front of someone holy, it is natural to ask: "Dada, what can I do for you?" Without any teeth, or dentures, his lips curl down on his gums and his whole body joins him in a gentle smile.

The answer is almost predictable, but it's almost good to hear it again: "I don't need anything. I am just an instrument."