A Day in Thane with Father Joe

When you step onto any road in Mumbai what really hits you is the teeming population, the filth, and the pervasive rotting smell. If Mumbai is indeed the melting pot of India, then it is quite evident that the stew isn't perfect. But the city churns through the night; there is activity everywhere, nooks for the lovers, pubs for the party people, and roads for the beggars.

Ah, that brings us to the beggars. Begging is a semi-organised occupation in the city mostly employing children, women, disabled people, and eunuchs. There are children available for hire, middlemen liaising between beggars in different suburbs etc. etc. I hunted around for two weeks trying to find out what happens to the beggar children loitering at every traffic signal. If there was indeed an NGO/ Government body that helps them get out of their undeniable misery. My search led me to AASARA, an organisation for street children, led by Father Joe.

On Friday morning, Father Joe picks me up on the highway to Thane. Thane has the main office of AASARA, which is currently managed by Reginald, a committed social worker who has been with AASARA since 1995 and is responsible for budgets, project activities and overall administration,Father Joe himself manages multiple projects-the current one is building a community center at Malad, which is quite far from Thane.

I hop in and we begin chatting about AASARA. It all started thirteen years back in 1992, when Father had to take a train to commute to work. He noticed little dirty children in the Thane train station doing miscellaneous work. He wanted to help them. Amidst rude stares, he spent time teaching the kids right on the railway platform. Luckily for him, the Station Master encouraged his work by allocating a small waiting room for the kids. Aasara, in spirit, had started!

A brief introduction to these children of a lesser goddess: the poverty-struck children in Mumbai follow a strict caste-based system. They are the slum children versus street children versus hopeless children. Slum children have a "home", most live with families, have access to water, cooked food, etc. They might have a vocation, but most slum children are encouraged to go to school. They are upper-caste poor children, whereas the street children are those who work as boot-polishers, railway compartment cleaners, small-time hawkers, rag pickers, and beggars. The street children often don't bathe and don't have access to cooked food or any sort of a family support system. They are the middle-class of poverty stricken children. There are of course the more disadvantaged children than either of these groups-- children in the sex-trade, for example, those accompanying the construction labourers as bonded sex workers, child labourers in the textile, carpet, and matchbox industry. Although these children in a sense have a more "stable" method of revenue or sustenance, the complete lack of individual freedom, according to me, puts them at a great disadvantage. A conservative estimate puts the number of such children not attending school in Mumbai city at 45,000; a more realistic estimate is around 70,000.

Without a rupee in his pocket, Father Joe had the children contribute Rs.5 from their daily earnings for the meals that they could themselves cooked in the waiting room, thus encouraging the 15 or so street children to become a family. I'm overwhelmed when our driver who is taking us to Thane, steps up and says that he was one those children.

The Childline is a telephone helpline for children in distress, where citizens can report child abuse and immediate action is taken. This is a project governed by Childline International with the aid of the government of India. The Tata Institute of Social Sciences (TISS) also helped initiate this project. It has been running for over 10 years now in the Kurla-Thane area and the Dombivili - Badlapur/Titwala area. Aasara has its own methodology of functioning that it fine-tuned based on a recommendation from TISS. Managed by about 30 full-time workers, the children who are found working or lost or wandering in the railway stations and roads are brought into the local day-care centers.Typically a day-care center is the one which begins the process of rehabilitation. After 2-3 months at the day-care, the children can choose to go to a 24-hour shelter. After a year or so at the full-time shelter, the children go to boarding school to take up formal Your browser may not support display of this image.education. Aasara runs three day-care centers, two 24-hour clinics and is affiliated to one boarding school.

The Sarva Shiksha Abhiyan has five centers - in Kalyan, Mumbai City, and Thane. Then there are the four NCLP special schools. As part of this project, Aasara points out to cynics that an extremely disadvantaged child could be transformed into a productive member of society, if only someone, anyone, believed in his dreams.

A disadvantaged child is typically one who is forced to fend for himself at a young age. This group includes abandoned children, run-away children, and children forced to work by their families to bring in money. By the nature of their work, these children have poor hygiene, endemic diseases like tuberculosis, drinking problems, drug addiction, and a higher mortality rate. To illustrate, many children sniff/eat powdered, white, typing-correction fluid (a kind of quick drying paint which produces a white surface to make corrections onto a type-written document) to kill their hunger, pain, depression etc., and this is habit forming. 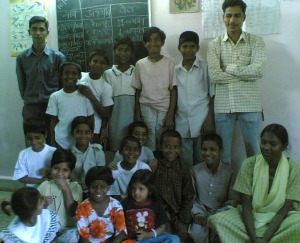 The ideal age to get the children to the shelter would be anywhere between the ages of five and thirteen. Older children have typically grown too wild or are too much in the clutches of the ugly elements of society to escape. Any child reported is taken to the day-care center. The child is given a scrub bath and a clean set of clothes. They are taken to a doctor to check their health. They are then set into the day-care routine. Children are encouraged to spend the day at the day care. They have to take a bath in the morning, say their prayers, eat their meals, and spend a few hours in non-formal learning sleeping, and going out to play in the evening. At night they go back to their old nightspots. Slowly the sense of community and security builds in the child and he chooses to make a long-term commitment to the transformation process. Then the child moves into a formal school close by and is in full-time care. After a year or so of monitoring, enough self-esteem is built so the child is ready to take on the world!

At Aasara and elsewhere, many such children have gone on to have "normal" lives, a job, wife, children, a house, and car.

There is a call on Childline, reporting that children are being used as labourers in a few garment units in a dark, dingy nook of Mumbai. Aasara calls the Police Task Force-a special unit of Mumbai Police- and gives them the rough location. Aasara collects its workers, hires a few buses, and arrives at the crime spot. The police barge in through hopelessly messy alleys, into shanties where the kids are working in lofts. Hidden from roving eyes, little children not more than 7-8 years of age, are sewing patiently thread onto cloth. As many as 500 such children are rescued and carried away on private buses to government-run rehabilitation centers.

A few years back, about the time of the Gujarat earthquake, one well-wisher VP of Zee TV Network invited the children to an Antakshari (Singing) Competition. They won the competition to take home 2 lakh rupees! Of these Rupees 1 lakh was donated to the quake victims. Even more amazing is that one participant from Aasara found his family. The parents saw the lost kid on TV and came over to fetch him!

Money/help keeps trickling in: British Airways, Concern India, Tatas, Father Maschio foundation. The only way to sustainably move forward seems to be to forget to worry about money and concentrate on the work. There was even a time when Aasara had 1500 rupees in the bank that wouldn't even meet the next month's expenses. The very same month, projects from three different Foundations were approved. Father Joe calls its Grace. I call it justice. Aasara has reached critical mass. Joining hands with multiple NGOs it has formed the CCVC-Coordinating Committee for Vulnerable Children. They sit together at a Municipal school near Bombay Central Station. They provide concerted care for the children. A few NGOs specialise in drug rehabilitation, others specialize in Medical help, education, rescue etc.

There is also liaising with the Government, UNICEF, and TISS on child-related policies. One instance was when these bodies came together to begin Childline India International 10 years ago.

There is much that can be done. Too many cooks won't spoil this broth.

The Man Behind the Work

Father Joe is no small man. To take on such sensitive issues as abandoned children, child labour, the under-world, hawkers of children etc. comes with the risk of police targeting, physical harassment, emotional blackmail and as Father Joe candidly admits even two deaths in one situation. However, all this has not made him one bit bitter. He believes that these difficult times, when no help was forthcoming, forced him to stand strong on his own feet. This he believes makes him capable of taking more risks.

Being a priest of course gives one faith and stability. But I ask Father Joe, how AASARA has managed to grow so much in size while many other people with good intentions have had to stop with helping just a few. Father replies, "The key is to grow organically. We didn't ask for a huge office room and a desk to begin our work. We began contributing in a small way and continued to take small positive steps forward instead of looking for giant leaps. That is the reason for our resilience and success."

** For more information on Aasara, or to "Sponsor a Street Child", visit their website located at: http://www.aasara.org