"Sir, how many eye surgeries have you done?" someone asked him once. "What did you have for lunch last Wednesday?" he questions back. Everyone smiles. Of course you don't remember what you ate last week, because it's not important. Similarly, for Dr. Doshi, his accomplishments and accolades don't need to be paraded. 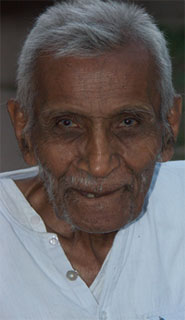 That answer, from a 89 year old doctor who runs a "miracle" eye hospital for the last 30 years, can knock you off your seat. Seeing this short, frail man, wearing a simple white kurta pajama, one would never guess that he's responsible for giving sight to thousands of poor villagers. Tucked away in a quite village in Gujarat, Dr. Ramnik Doshi has been working hard to provide accessible and free eye care to the poor, and finding his deeper self in the process.

Inspired by Ravishankar, a gandhian social reformer, Dr. Doshi and three of his doctor friends did their first experiment: a mobile eye camp in the village of Petlad, with the help of a few dozen volunteers. "Only problem was that we didn't have any money, any facilities or anything else. We went to the banks and said, 'Please give us 6000 rupees. We are going to give away this money and we don't know how we will generate funds, but we'll pay you back in six months.' Most thought we were crazy until we found one investor who also had faith in Ravishankar Maharaj," Dr. Doshi explained of their improbable beginnings.

On the first day, hundreds of people came, got their eyes cured, and ate a nutritious meal. It was one of the first mobile eye camps in the country and there was huge community buzz about it. One particular man, who was visiting the town, came to check it out was so blown away that he paid for the cost of the entire camp on that first day itself!

Not only that, the philanthropist wanted to pay salary for volunteer doctors who were giving of their time. Dr. Doshi remembered that time, "For three days, we had this tug of war. We came to give our service, so we couldn't accept it; but he was very insistent. So finally, Ravishankar Maharaj came up with a solution. He said we should accept the money and instead of taking it for personal use, create a trust which would enable future camps like this."

And Gujarat Blind Relief Association was born. Over time, Dr. Doshi moved his practice to Anand and then started the Nutan Eye Hospital in the village of Chikhodra. "I cannot be a professor, a teacher, or a builder but I'm a doctor so I can cure people of blindness," Dr. Doshi explains. When asked what inspired him to do all this, he humbly responds, "My forefathers did work for the poor, so I'm just continuing the family tradition." A moment later, adds, "It is one's duty to do what they can for those who have very little."

No heroic tale, no big life-changing story, this is just the way of life for him. Dr. Doshi is as simple and practical as one can be and takes no credit for giving a hand to the needy. "I have received far more than I have given. All this work is actually because of the blessings of one man, Ravishankar Maharaj," Dr. Doshi humbly points to the hanging picture over his desk.

When asked about the biggest lesson learned from Ravishankar Maharaj, he simply repeats one phrase in Gujarati: Gasai ne ujla thaou. In English, that translates to: the more you rub, the deeper your shine. "Think of the train tracks. If you look at the unused tracks, they're kind of dull. But then you look at the one from which the train just passed, and you see it shining," Dr. Doshi elaborated. So, if you use your mind, it'll get sharper; if you work your body, it'll get stronger; and if you serve, you'll be more alive.

Sleeping only six hours a night, Dr. Doshi works seven days a week, practically 16 hours a day. Married for over 60 years, he and his wife live on the hospital grounds in a simple house. Yet Dr. Doshi proudly exclaims, "I haven't been sick for the past fifty years. No cold, no flu, no diarrhea, no sore throat, nothing." What's his secret? "To live with joy" he confidently reports with a big smile. Then he elaborates: "Its simple cause and effect. If you feed others, you won't go hungry. I give others health, so I don't get sick. Serve others, and you will be served."

Born into a Jain family, Dr. Doshi values religion and meditates every morning and evening. Spirituality is as an integral part of his life: "First you have to purify your mind, and then your actions will become pure." Looking at the number of patients he's served, the number of mobile clinics he's held across India, and the number of lives he's inspired, it's easy to imagine why his actions seem so pure. When a doctor, who has been with Dr. Doshi for 22 years, was asked what he likes most about Dr. Doshi, he responded, "I like everything about him but one quality that stands out is that he has no false thoughts."

To continue serving with such zeal, day in and day out, Dr. Ramlik Doshi has really put his teacher's lesson into practice -- "Gasai ne ujla thaou." Keep churning and let it shine.