A reporter once asked Gandhi, "Bapu, give me your message for the people." He instantly replied from a moving train, "My life is my message." Repeatedly, Gandhi asked his supporters to burn all his books and words on his own funeral pyre: "Those who believe in the simple truths I have laid out can propagate them only by living them."

Dwarko Sundrani paid attention. Today, at 80 years of age, he is the last active disciple of Gandhi and living the message of his teacher. 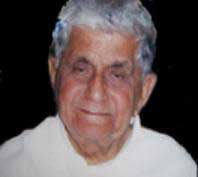 In Bodhgaya (India) -- the place of Buddha's enlightenment -- Dwarko started with running a school for the poorest of the poor. His aim wasn't just mathematics, chemistry and history, but rather the "total development of man". Today, he has founded a network of 360 schools and engages in all kinds of social action: from eye camps to vocational services for the underprivileged.

Dwarko-ji, as he's often referred to in India, also runs an ashram in Bihar. At his ashram, S.N. Goenka gave one of his first 10-day meditation courses, which has reached hundreds of thousands of people since; it was there that Satish Kumar, a student of Dwarko, commenced his revolutionary peace-walk from Gandhi's grave to Kennedy's grave. Martin Luther King, Jr. visited him. Vinoba Bhave, regarded as Gandhi's spiritual successor, entrusted him with running his own ashram and J. Krishnamurti shared an experience of immense joy in their first personal encounter. The stories go on and on.

It is no wonder that the 14th Dalai Lama, his close friend, says to him: "Dwarko-ji, I teach compassion but you live it!"

"The purpose of life is to give service," Dwarko says. From birth to death, we are continously receiving service, whether it is from our mothers or the plants in our backyard, and it is our duty as human beings to give back to the inter-connected circle of life. When you hear this from Dwarko, somehow, it almost seems common sense.


"I don't know." For a lot of people, those three words can be terrifying. But for Dwarko, they may as well be his favorite words. How did you come to pick Buddha's birthplace as your place of service? I don't know. How do you sustain all these huge projects if you never ask anyone for a donation? I don't know. Dwarko says that it's not his job to know; he is just an instrument of service, in the hands of nature.

When you have the heart to let go to such a great extent, you bloom wherever you are planted. In his youth, Dwarko didn't want to marry but when his Dad insisted, he put forth one condition -- "I will marry if you don't take any dowry." After a heated exchange of words, he left his home and became a teacher. (He never did marry but after 35 years, his Dad did eventually reconnect with him.)

Dwarko had six rupees (worth a dime today) when he first ended up in Bihar; he needed that six rupees to take the train and reach the ashram of Vinoba Bhave. As it turned out, a poor person on the street asked him for the money. Spontaneously, he gave it away! Instead of taking the train, he walked for a couple of days straight and managed to eventually reach his destination ... errrr destiny.

My life is my message, as Gandhi would say.

To give away literally everything you have is no easy feat. In fact, one wonders if that's even possible. But Dwarko Sundrani is proof positive that it's possible. His work today spans millions of rupees and more importantly, has positively affected thousands of people all over the world. He still doesn't know what he is doing, where is going to be tomorrow, and why he's doing it. And that, actually, is the beauty of it all.


"When I was young, I once burned a post office for protest," he said with a wry smile. If you weren't hearing this from the last active disciple of Gandhi, you'd wonder. But for Dwarko, it symbolizes yet another victory over the violent tendencies of the mind. 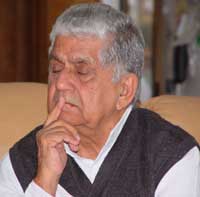 An eye for an eye, over time, will leave the whole world blind. Violence just seemed to destroy what he was trying to build and so Dwarko abandoned his naive ways.

He developed a new weapon to connect with ideas, things and people -- soul force. Words used to be mightier than weapons but in this age of information overload, words have lost their meaning. Action programs used to work but they are also losing their power due to confused means. "Time has come for using soul force, collective soul force," Dwarko proclaims.

Real education for him is an understanding of this soul force. Math, science, and history are necessary but those subjects are simply the glass that holds the water. If you're really interested in quenching your thirst, you have to drink the water. Dwarko explains: "Gandhi's mission wasn't just India's independence. That was a very small part. His real purpose was to create a new man."

For Dwarko, development of that new man of soul force, a man of non-violence, is "true education".

"Non-violence isn't a campaign. It's a way of life," Dwarko emphatically says. And he learned this straight from the man of the 20th century, the father of India, his teacher -- Mahatma Gandhi. For Gandhi, as you know, even haste was a form of violence. An action of violence stems from a thought of violence, which arises from dissatisfaction with the present. And that present moment is every moment.

Seven Blunders of The World


Dwarko was later asked, "Gandhi faced the cultured British rule but do you think he could've handled Hitler?" "It would've been easier for Gandhi to handle him, actually," he replied. "Just as you can't see the lights in the evening but can see them brightly in total darkness, the message of nonviolence would've easily worked in the total darkness of Hitler's Germany."

And it starts with you. Are you non-violent?"

Then, he elaborated on Gandhi's seven blunders of the worlds: wealth without work, pleasure without conscience, knowledge without character, commerce without morality, science without humanity, worship without sacrifice, politics without principle.


It has been thousands of years since Jesus Christ said, "Love thy neighbor as thyself." In fact, that golden rule has been proclaimed by every major religion. Gandhi also told us, "It is no nonviolence if we merely love those who love us. It is nonviolence only when we love those who hate us."

As easy and utopian as it sounds, it's not. Someone asked Dwarko, "What were Gandhi's weakenesses?" And he quickly responded: "Gandhi had many many weakenesses. But he had one strength -- when he found truth, he wouldn't let it go."

"A saint is a sinner who never gave up," Yogananda once said. All of a sudden it hits home that you're sitting in front of a saint.