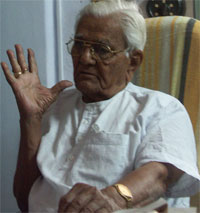 You can't find a single tea stall or a paan store or an alcohol bar or a gambling joint in Navaagam, a village outside Ahmedabad. There's one primary reason for this clean, literate, and inspiring village; his name is Govardhan Shambhubhai Patel.

On March 13, 1934, second day of the infamous Dandi Yatra, Mahatma Gandhi stopped at Navaagaam. A prayer hall was organized for him, but when the clock hit 6PM Gandhi was still on the fields; so he halted everything and did his prayers right there on the farm. Fourteen year old Govardhan happened to be there with him. Later that night, Gandhi gave a talk at a public gathering and Govardhan was there as well.

"I used to be a pure Brahmin type: do your prayers every morning, don't touch the untouchables and what not. I even thought that English people were superior somehow. But then I heard Gandhi-ji speak," 90-year-old Govardhan recalls. "He talked about freedom, not fearing the English prisons, and so on but I think something about his face just transformed me. I decided right then that I was going to serve others."

When he was a year old, his mom passed away. When he was in fourth grade, he dropped out of school to serve his Dad who had just contracted polio. Out of sheer will, he studied at home and managed to pass 10th grade.

During this time, he teamed with 4-5 buddies and decided to serve his own town, with a population of a 1000 at that time. One by one, they would pick problems in their community and get them fixed up during their spare time; everything from riding the village of mosquitoes to creating awareness about health issues.

Soon enough, word got out about his leadership, influence and sincerity. Madhavlal Shah and Raojibhai Patel, two prominent Indians at the time, asked him to serve nearby villages. He refused. "Why?" everyone asked. "I'm in debt. I have to continue to farm to survive. So I will continue to stay here and serve Navaagam."

And then an amazing thing happened.

"All the town people came to me and said that they will farm for me, if I would go out and serve. So they literally divided up my farm into manageable sizes and collectively did my farming and gave me all the proceeds from the farm," Govardhan-kaka recalls with a sense of love in his eyes.

He would be out 355 out of 365 of the days. He went throughout the villages, affiliated with political parties and created solid social change. Everywhere, he would propose solutions, the naysayers would yell 'impossible', and he would prove them wrong. Again and again.

Partially, it was Govardhan-kaka's intellectual might. But in large part, it was his indefatigability: "Sleep, food and rest are three things I never think about. I had to set a certain time to eat, otherwise I would just forget. Quite literally, I have gone days without eating, simply because I forgot." And anyone who sees the 90 year old man move as if he was 55, would believe his statement.

Arguably the most interesting part of Govardhan-kaka's personna is that he applies his intellectual, physical and mental ferocity to everything. Including God. Seeing the contradictions of all the God-men, of all the saints in nearby temples, he quickly lost faith. In fact, he became an athiest. "I have one princple: whatever you don't like in others, make sure you don't do that yourself. That's it. No karma, no God, no after life, nothing doing," he says with an umph. In his later years, though, he admits to have known of a higher energy form but about God, he still thinks it's uncessary to label it as such: "Serve and you'll be served. If there's a God, you're in good hands; if there isn't a God, society will take care of you. Either way, just serve."

Funny thing is that while he speaks out against many spiritual giants, all of them love him. "I once publicly told Pramukh Swami that he is not doing the right thing by creating all these saints. That is not what the world needs today. If he has a tried and true person of character, put him into politics and see his is able transform our political system. Pramukh Swami and I have very good relations and he's never disagreed with me. When I spent time with Ranghavdhut Maharaj, he knew my views on God and all the so called devotees but he would just smile and say that I was on the right path."

Govardhan-kaka is very clear that he is not doing 'seva' (selfless action) nor has he made any sacrifices. For him, being-the-change is just simple common sense.

"You have to be useful to others, even if it is just a word or two of advice to someone in need," he adds. If there is no opportunity to serve, he won't accept any temptation; his three daughters live in the United States but when they got him a green card, he rejected it because he is of use in Navagaam. He doesn't buy any gadgets either, unless they help in doing good work. "Anything you have should only be used for the good. I have a telephone, it is only for doing good. I can receive post (mail) here, it is only for good work. But I don't have a car or a scooter, because I can easily take the bus," Govardhan-kaka notes. And he is the same way with money. In 2004, Govardhan-kaka received the prestigious 'Vishwa Gujarati Samaj' award; his added 25% to his 100,000 rupee award and donated it to a local school that needed it.

Every evening, Govardhan-kaka sits under a particular tree in the village. All the villagers know to go there, if they want to talk with him. And after having spent most of his life in that village, everyone knows the essence of his advice: "Do what you can, to serve wherever you can. Whoever does good will have good."

Still, people visit him under the tree. Just to be with him.