"Why do you wear those robes?" someone asked him. "Because it makes it easy to sit cross-legged," he replied. End of story. With Zen master Les Kaye, there are no romanticized descriptions, no fabricated stories, no beating around the bush. The idea is to just be real and express your True Nature, without grabbing onto belief systems and projections.

"I'm a rock starrrrrr," he opened. 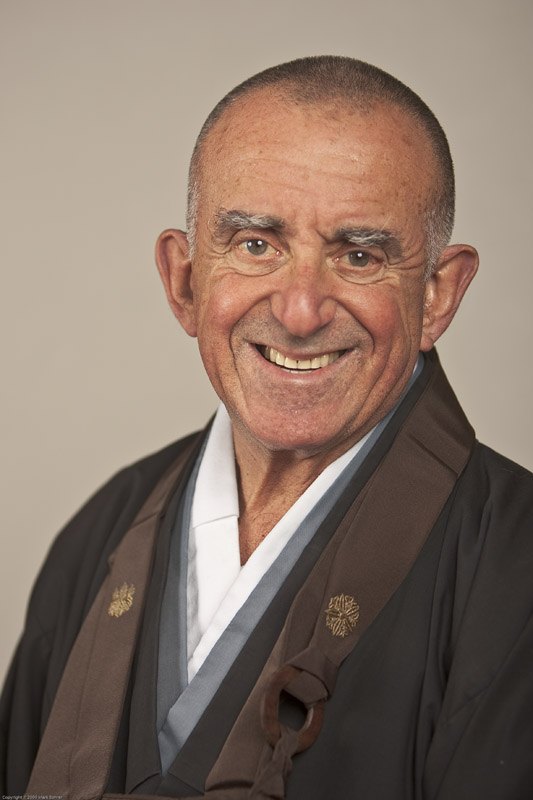 With a child-like glee, it was almost as if he was touching the mic for the first time in his life. If you didn't know any better, you might just think he's a grown-up 2 year old; you forget that Les Kaye is the abbott of a monastery, a published author, a Zen master.

That's not your typical Welcome-to-Zen opening but maybe that's the point.

"A spiritual life requires the gathering of life. It emphasizes focusing attention and activity on what we are doing in the immediate moment, without ideas of personal gain. When we are completely present in that way, each activity becomes the most important activity of our life; the activity - the moment - becomes our entire life," Les says.


When you are in synch with the moment, everything is a blessing. And indeed, if you ask Les how he got involved with Zen, he'll say "by accident."

In 1961, a young man recently employed as an engineer at IBM in its heyday, attended a party at the home of a friend. Perusing the bookshelves of his hostess, he discovered a book that was to change his life and, thereafter, those of many others over the next twenty five years. The man was Les Kaye; the book was The Way of Zen by Alan Watts.

Not long after, Les found his way to San Francisco Zen Center and became a direct disciple of Shunryu Suzuki in 1971.

To pursure "higher" spiritual goals, many tend to leave everyday life. Les stayed. He worked diligently to find the spiritual in everyday life: he worked at IBM for 30 years, raised a family with his wife Mary, and stayed engaged in society.


When people ask him where he got his spiritual training, he likes to say "IBM". In his popular book -- Zen At Work -- Les offers his own experiences as proof that the distinction between the sacred and prosaic exists only in our small minds; that, in reality, making coffee, brushing our teeth, driving the freeway and changing the baby's diaper are equally potent for

endless joy, if we allow them to be.

Why did he write the book? "To iron out my own confusions," Les said without a flinch.

Wow. While most take immense pride in what they have done and go to great lengths to cover up their insecurities, Les simply says, "You can't wear your accomplishments as medals, physical or spiritual." To experience such humility in front of your own face can totally shake the premises that you've always taken for granted.

"Spiritual practice doesn't exclude our humanity. Actually, it's just the opposite. It fully accepts it, with our imperfections," Les explained. That hits home, especially because it's coming from a man who actually walks the walk.

No Souveniers, No Traces


However much you are drawn to Les, he doesn't give you

anything to cling onto. "We have to be careful of a mind that's always collecting souveniers," Les warned.

Point blank, someone once asked him: "What would you do if you have ten minutes left to live?" While most people would think, debate and ponder, Les immediately and confidently replies with a smile, "What's wrong with what we're doing?"

No traces. Like the birds who fly in the sky.

When asked about the transformative experiences of his life, Les patiently explained that "transformation" implies changing from one level to another: "In reality, there are no stages." You mean that we're already there, we have already arrived? Yup, that's what he was saying.

All of a sudden, you feel empowered and free, as if someone just told you that you are perfect. Only thing left to do: "waking up" to the connection with all life around us.

The only hurdle in waking up? Your own confusions. Beginning Zen students get one instruction: sit and be aware of the breath; if thoughts (desires) surface, observe it and let it go. "And there's no other instructions after that," Les reminded us with a smile.

Later he described one of his 'waking up' moments ...

Midway through the radio interview, the moderator asked me, "What techniques do you use to encourage people in their meditation practice?" With some pride, I said that we did not use special techniques, such as visualizations, enigmatic riddles, promises of spiritual attaintment, or strict discpline.

Kobun then spoke up. He said, "We use the most important technique -- people's own sincerity." Hearing his words, I was staggered, as if I had been struck by an icy ocean wave. My spine tingled; I began to perspire. I felt numb and giddy as my mind seemed to float and expand. His few words went directly to the heart of spritual understanding, cutting through the analytic limitations of my own rational answer.

Les's own sincerity is unmistakenly visible. You get the sense that no matter who you are, even if you bump into him randomly outside the restroom, you will be the most important person for him, in that moment. Much in the same way that being next to huge, unshakable mountain is majestic, seeing this 70 year old man sit on the ground, with a straight back, is nothing short of awe-inspiring.

"We can't change the world," Les says. "But we can take care of what we can touch." Les certainly touched us.