What: a 3-day retreat, from November 24-26, to explore the possibilities of fusing the work of external impact with inner transformation. This includes conversations about personal transformation, engaging with transformative practices within an organizational setting, designing from the lens of different forms of capital, engaging stakeholders with a broader sense of metrics, and ultimately, putting more transformative case studies into the commons of humanity. 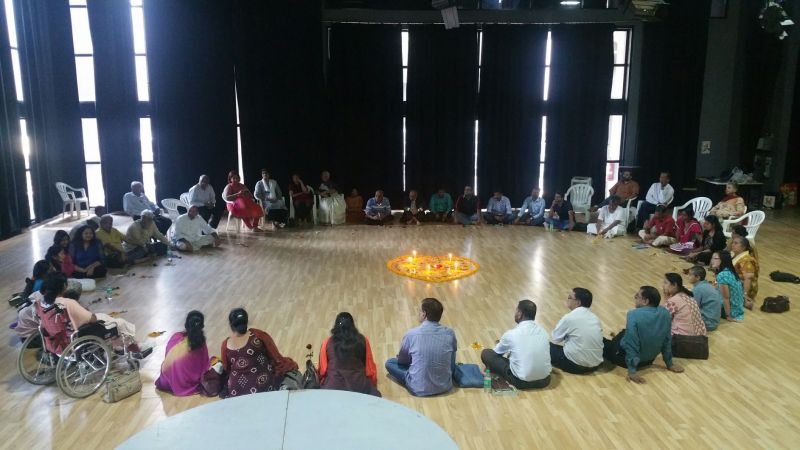 Inspiration: NGO retreat last year. :) By simple holding space for our shared values, we were moved to see the depth of the collective intelligence and an immediate sense of kinship that emerged. As one participant remarked, "Until this weekend, I was on a mission for 'outer transformation' -- to do something for make the society a little better. I was using my mind and intellect for that act of outer transformation. Yes, I could have been successful in that, but it would been have been like cultivating a flower without understanding its fragrance. To smell the fragrance, I realized that I need to first transform myself to be a little more kind to myself and to all I meet in everyday life." Through the year, we continued to hear ripples, whether in small practices or in more systemic ways. So we're doing it again this year, to include broader range of NGOs.

Who: this event is put on by volunteers, like Smitaben and Jyoti-ben (from Drishti Foundation), Sheetal, Swara, Deven, Sanchi and Neeti. Our participants will include inspirations like Sister Lucy of Maher, Viren-bhai from the Gandhi Ashram, Naseema Didi from Helpers of the Handicapped, and visionaries of Sahyadri hospital. This year, we are also inviting philanthropists -- like Dasra and Caring Friends -- to deepen the cross-sector dialogue.

How: our hope for the 3 days is to build a conversation around how NGO leaders can align their external service with pathways to inner transformation, and come up with practical steps to implement those ideas. Instead of a one-time campaign, we see this as a movement -- a movement that continues well after our time together. Having done many such emergent "Moved by Love" retreats, we are convinced of its capacity to build powerful ripples in a natural way.

Where: at a beautiful center on the outskirts of Pune (near Talegaon station).

Costs: entire retreat is offered as a gift. Lodging and food costs are covered by past participants; its operations are managed entirely by volunteers. After the retreat, participants organically pay-forward however they are moved, and keep the ripple of generosity moving.

To apply, simply fill out the form below and we'll get back to you.

We're thankful for the inspiration of many such agenda-less gatherings held around the world.